A petunia in the onion patch 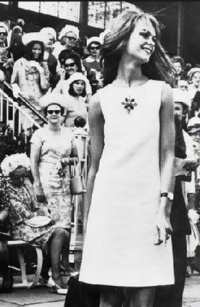 Shock sensation outrage as Jean Shrimpton turns up for the first day of the races without gloves . . . without a hat . . . and showing rather more thigh than Melbourne matrons were used to seeing in a grown woman [youtube hindsight]. When she arrived, assuming that nobody would notice, everyone stopped talking and stared in a show of ill-manners that exposed the conventions of the time as frumpy, intolerant, and all together too floral, my dear. The Ozzie press had a field day, shifting the Derby winner, owner, trainer and jockey off the front-page and showing the best picture of the girl and the event that they could scrabble up. The English press, scarcely less hidebound and conventional than their Australian counterparts, rushed to defend their girl; one of them coining contemptuous superiority to those Colonials with the phrase "petunia in the onion patch". There's no doubt but that Shrimpton, like Hedy Lamarr, was symmetrical.  Me, I'm glad that she and we-all have left the clipped strangled English accent that today's middle-class-southern evolved from.  She was the first super-model: paid £2000 by the textile company Dupont de Nemours to make an appearance at Melbourne races. That was more than the annual take for an average salaryman. Two years later, my father, retiring at fifty after a lifetime in the navy, pulled down a salary of £3000 to work as sales manager in electrical engineering. Dupont was the same multinational that employed Stephanie Kwolek, for far less money, to make Kevlar. I think that comparison exposes the whole silliness with which Western society divvies up the money.
Posted by BobTheScientist at 07:12