Szombathely is a town in Western Hungary which has in previous times been called Savaria (or more formally Colonia Claudia Savariensum) Steinamanger, Sombathelj, Sambotel, Sombotel, סאמבאטהעלי.  I doubt if many people are speaking Latin or Yiddish there any more but perhaps the middle four toponyms are current today.  Perhaps any Slovenes in the region could answer?  Although all the names begin with S, they have quite different etymology: Szombathely means Saturday-place in Magyar a reference to the day they held a market; Stein-am-anger, contrariwise means Stone on the green/commonage in German, the Yiddish is a transliteration of the Magyar.  And to put a Czecho-Slovakian cat among the pigeons, it's also called Kamenec, Kamenica.  And we think we're polyglot cosmopolitan when we have two names for Dublin/Baile Átha Cliath.

So, they ask, what's the deal with Saturday-market? Well, I reply, it's not just that it is the birthplace of St Martin de Tours, he of the generous cloak. It's also a place which celebrates Bloomsday. 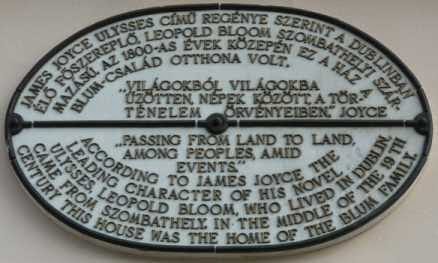 Bloomsday commemorates the day James Joyce met the-love-of-his-life Nora Barnacle and asked her out for a date which happened on 16th June 1904 on South Leinster Street in Dublin. I doubt if that's why they planted a car-bomb there just under 70 years later. Years later when Joyce was writing his masterpiece Ulysses in Trieste, he decided that his life-in-the-day-in-the-life novel Ulysses would be set in Dublin on the day he met his beloved.  He used a copy the 1904 edition of Thom's Street Directory and his walking memory to research the locations because he was in exile from his native land. His fictional protagonist Leopold Bloom was a second generation Dublin Jew whose father Virág Rudolf came from foreign.  As a fictional creation, Joyce could have picked any town in Central Europe as the father's birthplace: Antwerpen/Anvers; Wrocław/Breslau; Львів/Львов/Lemberg.  But he chose Szombathely and the city fathers, acknowledging the honour, have a bit of a knees-up every 16th of June.  So do lots of other people in Dublin and elsewhere.  There was an enormous street party in Dublin on the centennial in 2004 with lashing for free sausages and rashers which were served picnic-style on Celtic Tiger skins. Me, I keep my devotional energies for Darwinday on 12th February 2013, 2014.

Now, I have read Ulysses: all 265,000 words of it.  It's about as long cover-to-cover as The Blob and if you find me obscure and convoluted at times, you should try Ulysses!  Actually, unless you're doing it in college with a group of students and a competent teacher and a bunch of commentaries, I wouldn't recommend Ulysses unless you've over 40.  A lot more of it passed over my head when I ploughed through it as an 18 year old, than when I dipped in again at twice that age. But I can't be bothered to read it again and again. I'd rather be flitting about making sense of my real world than trying to get a grip on one man making sense of his fictional world.

I'm posting this early so you have time, like Leopold Bloom, to fix some mutton kidneys with a fine tang of faintly scented urine for breakfast, burned for verisimilitude if you are a purist, and not fill up on toast.
Posted by BobTheScientist at 06:08