It's those left behind who suffer.  When I was a teenager living in rural south-east England we had a wide circle of friends. To meet them in the summer required a car and possibly a tennis-racket. I passed my driving test first time when I was 17.5 and my sainted mother allowed me to drive her venerable Vauxhall Viva about the county when she didn't need it herself.  On the way home from the 'main' road there was a straight, if undulating, stretch of lane about 800-900m long. I was interested in seeing if I could crank the old bus up to 70mph (110km/h) before the next curve in the road required a rapid deceleration.  This could only be achieved with normal tyres and a 1100cc engine if I came out of the last corner, more or less on two wheels, at a minimum of 50mph (80km/h).  I moved on to other challenges, like girls before I became a single vehicle driver-only statistic. One family in that circle of friends came through those years one short because the middle girl over-dosed herself and didn't survive. They spent the next several years, each in their own torment of agony & guilt, reliving what they could have done differently on that critical night. My driving habits were so reckless as to be suicidal but at that age you are going to live forever and don't have enough experience to feed the imagination of what might happen.

This all came back to me because I was reading an essay in Nature 22May14 called Mental health: A road map for suicide research and prevention by André Aleman & Damiaan Denys two Dutch academic psychiatrists.  They are banging the drum for us to bring suicide into the front line of our focus rather than keeping it locked in the aching hearts of survivors.  Suicide is both shameful and unexciting, so fails to attract the interest and attention of the medico-social research community. If you present at A&E with a garden fork through your foot or having a heart attack, then the effectives can do something; if it involves fancy machines and high tech tests so much the better.  Here's an interesting piece about an ER doctor who gets hit by a car and subjected to all sorts of diagnostics without anyone stopping long enough to bend over her and look carefully at the bits she was reporting hurt.

The CDC in USA claims that the cost to the economy of a suicide is just over $1million.  This figure from Aleman and Denys's article agrees with that assessment although 2/3rds of it are "intangible costs" and only 1/0000th goes towards the funerals.

Their main point about this graph is that £10million spent on utterly unsexy general-practitioner education, followed by psychological and pharmacological therapy has the potential to save 50x as much money in societal costs. These figures are based on 600 avertable deaths. Maybe "intangible costs" are the monetised value of the grief and guilt and remorse that result from a successful suicide. Whatever about the details, let us do this thing! GP training and an info-leaflet campaign can be carried out by people who don't command a medical consultant's salary.  But if the figures pan out they will reduce the numbers of psychiatric consultants required.  Everyone wins except the consultants, so it's unlikely to happen any time soon.

The other graph in the article is a map of the different rates of suicide across Europe.  It looks like the variation is substantive.  Aleman and Denys also report that in Nederland the rate of suicide increased by 30% between 2008 (N=1353) and 2012 (N=1753). They suggest that the excess is due to the financial meltdown but don't critically evaluate whether such a hypothesis stands up to close scrutiny. The effect of the 2008 collapse was demonstrably less in NL than in the PIGS economies of Portugal, Ireland, Greece and Spain.  One who like to see comparable figures for those countries for starters. Neverthless, you'd want your public health people to perk up and find out what's happening. 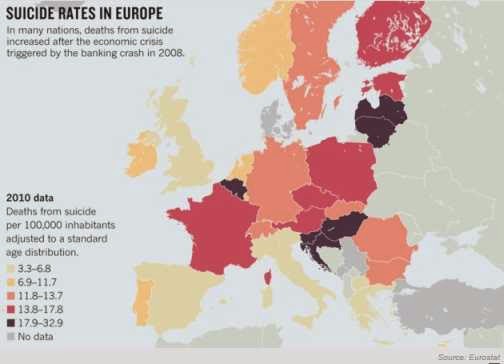 This also makes you think. Is it credible that there is a real difference in the suicide rate between Croatia >18/100,000 and Bosnia-Herzogovina next door >7/100,000 ?  Or is it that suicide is more shameful, and so less recorded on death certs, to the (muslim) Bosniaks than it is to the (catholic) Croats? I know that it's common for the local GP in Ireland to sign off a death certificate with "shotgun accident" or "accidental drowning".  It's only when the unfortunate hangs himself in the barn or leaves a note and an empty bottle of pills, that charity and compassion cannot soften the blow.

My pal Kevin Byrne is bloggin' now at http://NowOrSoon.com and he has an interesting piece about the realpolitik utilitarianism of drinking, driving and isolation in rural Ireland
Posted by BobTheScientist at 08:07