Wake up me hearties and hear the clarion call.
Today is Darwin's birthday, a science-geek festival
This time last year, I wrote an essay about Darwin's careful science and attention to detail, only through which he was able to construct the bigger picture.  In 1982, almost a whole career ago, it was the centenary of Darwin's death.  I was  graduate student in Boston University coming to the end of my PhD program.  Boston is filled with colleges - Boston College, BU, Brandeis, Harvard, MIT, Tufts, U.Mass, and so on to 50 less well known places.  But IIRC, the only place that chose to celebrate this event was Salem State College.  So me and some pals from the Ecology basement went North and spent the day taking part in a symposium in honour of the Great Man.  It was pretty good - worth the 50km round trip - but I could not remember whom I'd heard.  The line-up apparently included my mentor Lynn Margulis, Ernst Mayr who wrote The Book, and Don Johanson who discovered Lucy who walked the Earth upright 3.5mya.  Good indeed! 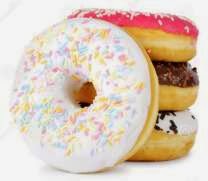 Things were much bigger in 2009 at the bicentennial of Darwin's birth but his cult is sinking a little below the horizon again.  It is only the few, like me, who have kept the faith and remember The Great Man's Birthday every year.  For about a decade, when I was i/c a slush fund at work, I'd buy 6 dozen Dunkin' Donuts (the large gaudy ones in a pink and orange box - mine's a maple-frosted) and stagger into coffee-break with them on Der Tag.  When the slush-fund dried up, I paid with me own money.  Everyone was duly appreciative - free food was still important to graduate students in the early 1990s - but a little bemused.  You could see them thinking "Oh, it's that time of year again . . . glom!" rather than knowing already.  Eventually, I got tired of pushing this tradition single-handedly up-hill and stopped doing the donuts,

You can try and find a Darwinday event near you, but don't hold your breath, the site is only as good as what it is told, and knows nothing about the talk in Dublin this evening. My российские читатели will have to go to Новосибирск where events start at 4pm local time, which if the surreal promotional video is anything to go be, should be exciting and weird.

I think its salutary in this era of ultra-specialisation to remember that Charles Darwin was a bit of a polymath.  He wrote full-length books on (ABC) Annelid earthworms, Barnacles, Coral Reefs, Coleoptyles and plant hormones, Climbing plants, Descent of Man, Expression of the emotions, Fertilisation in Orchids (wild and wonderful), Insectivorous plants.  These tend to be written in a ponderous Victorian style but are probably more worth reading than racier stuff published last year.

Here's a quiz. Darwin spent 20 years of his life working on barnacles, so they must be important. But which Phylum (major division of the living world) are they part of?
Not a clue? You're in good company. When I gave this quiz a couple of years ago to 50 of the brightest people in the country in one of the premier biological science departments in Ireland, nobody knew the correct answer.  Narrower and more specialised puts the bigger picture out of focus - a salutary lesson for the day that's in it!
Posted by BobTheScientist at 06:37