Once our Science was frothy

We've just finished "Water" in the 4th Year Environmental Chemistry course.  It's been a round the houses on everything I could find out and make interesting about the fluid on which all life depends.  Lake Nyos and Lake Baikal; Water treatment for drinking and water treatment of the other end of drinking; groundwater, wellwater, seawater and freshwater.  A few case histories have been brought in to give a memorable picture on which to hang the academic knowledge.  One tale was the death of Lake Erie in the 1960s.  Erie is one of the Great lakes on the border between the USA and Canada. It is in the heart of a well-populated industrial and agricultural zone from Detroit to Cleveland to Buffalo and back through Western Ontario. In the great post-war industrial boom of the 1950s white-goods were churned out of American factories and bought by every home to match a gas-guzzling elaborately-finned automobile.  Washing machines took the drudge out of sudsing over a hot tub every Monday but, with no effort involved, every day became wash day.  Proctor and Gamble and Lever Bros put their chemists to the task of making washes whiter, brighter and oftener. The effectiveness of these amazing new detergents was diminished in hard-water areas because the Calcium and Magnesium ions in the water ate up the detergent before the detergent could eat up the dirt.  So the boffins threw in 'builders' to eat the Ca and Mg.  The most effective builder was phosphate which was so natural it was not harmful to humans and which broke down after use in a simple biodegradable way that everyone understood.

So far so shining.  But all these washing machines were directly or indirectly discharging into Lake Erie (and other lakes and watercourses) which was naturally chronically short of phosphate.  Indeed it was the limiting element for that ecosystem and when a man-made deluge of phosphate hit the water the algae had a field day.  The lake turned green and the herbivorous insects snails and fish grew fat on the weed, then carnivorous insects and fish ate the herbivores and all players were metabolising up to ninety.  That sucked all the oxygen out of the water and over the course of a couple of decades every living thing in the Lake floated belly up. Bacteria worked away on the corpses and when the last smidgeon of oxygen had been depleted by these 'aerobic' microbes then the 'anaerobic' bacteria lived off the rest producing methane, hydrogen sulphide and other noxious substances. In parallel farmers horsed out cheap phosphate fertilisers onto their fields to boost yield and much of this ran off into drains, rills, streams, rivers and Lake Erie.  So far, so phoooeeew

The Canadian and US governments came together, not for the first time, to sort it out with the Gt Lakes Water Quality Agreement 1972 which sunk $8billion into waste-water treatment plants, issued guidelines on fertiliser use and controlled detergent use.  The Lake has recovered some of it's former biodiversity.  In 1993, the US banned all phosphate in detergents, which sent the chemists scrabbling for builders that were less effective, more expensive and with more questionable health effects than trusty phosphate.  Phosphates are, 20 years later, still allowable in the EU, but they are due to be banned next year.

I set the class up with a co-operative assessed assignment, different from the Fluoride Debate that so engaged them a month ago. Everyone was to read the table of contents of one laundry detergent and consult any ancillary documentation on the wuh.  Then come up with some compare and contrast graphs to show the presence of phosphate and the relative cost.  That worked out very nicely and they chose to clag all the data into a poster.  I got this blown up to A0 size and yesterday in the last 10 minutes of class we trooped along to put it up on the wall in the Science corridor.  They found a clear spot opposite the main Biology lab and we stuck it there to 'stick it to the biologists' who are all doing their final year projects in that room.  I was so proud for them!  I sent an all-staff e-mail to tell my colleagues where to look for informed advice on which detergent gives best value (the green bar is the key metric): 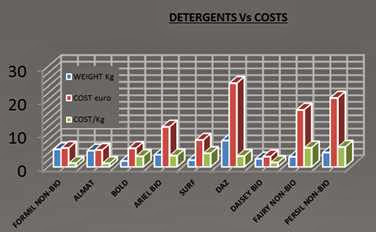 Posted by BobTheScientist at 06:37