'Television? The word is half Greek and half Latin. No good will come of it." I didn't start the day intending to celebrate the birth of CP Scott (26 Oct 1842), early 20th century editor and owner of the Manchester Guardian.  But his quote about TV turned up in a wholly different context in the the jumble that is my 'mind'.  Scott was wrong about television (some good has come of it), as he was probably wrong about  the militants of 1916 (eager martyrs) and Votes-for-women (cause-undermining fanatics).  But then, as a Liberal MP and owner of the quintessential Liberal newspaper, he preferred to tweak things right in a long-game rather than forge things anew in a revolution. He's not to be confused with CP Snow, chemist and author, who most clearly articulated the rift between Science and The Arts Block which I bang on about so much.

Vexillology is the study of flags.  Like telly, it is derived from Latin (Vexillus) and Greek (logia) roots.  It's rather weird how much attention we give to these distinctive pieces of cloth.  The US Congress needed 1000 words in 1942 to elaborate the punctilio required for the stars-and-stripes, how and when to hang it, as well as "The flag should never be used for any advertising purpose, nor embroidered on cushions or handkerchiefs, printed on paper napkins or boxes, nor used as any portion of a costume."  Etiquette has slumped since the Vietnam War in the USA and elsewhere, with the flag on coffee cups, underpants, paper napkins and flip-flops.  A sense of identity is greatly facilitated by the 2 or 3 colours adopted by the GAA committee in each of Ireland's counties more than 100 years ago.  Black&Amber for Kilkenny, Red&White for Cork, Red&Black for County Down (and internationally for the Spanish Anarchists, and parochially for the Mt Leinster Rangers).  It is my contention that having three colours rather than two in the flag for Carlow is why they have been so crap at both branches of GAA since the foundation of the state.

This spring Dau.II embarked in a concerted push to win some home-education for herself before she left home to continue her education in the University of Life.  This consisted largely in sacking out on the sofa downloading so much video that she smashed through our wireless broadband allocation one month and we faced a bill for €90 at 2c a MB.  That's a lot of Masterchef.  She alternated this passive basking with the greater challenge of sporcle quizzes.  She absorbed a lot of information in this way and she's smart enough to be able to use the data, somewhere, sometime.  So this quiz is for you, petal: 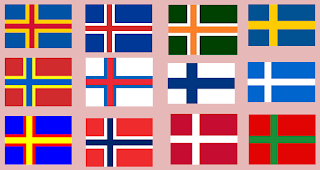 Who swears allegiance to each of these flags?  Some of them are genuine (acknowledged by the UN or the People's Front for Vexillologists), some are a bit more aspirational and one is a complete fantasy in a project to imagine Nordic flags for any and all countries.

More links to Flag-waving on The Blob.

Posted by BobTheScientist at 17:39