Maude Delap a life in the wet

Maude Delap.  Never heard of her.  Maude Jane Delap. She's not in wikipedia so she can't be important. Maude Delap the marine biologist from Valentia Island, Co Kerry.  Nope, sorry.

You see what women in science have to cope with?  They are invisible, side-lined, forgotten.  Delap doesn't mind anymore as she's dead since 1953. When she was alive, albeit within a narrow peer group, she was extremely well respected, despite living on an island off an island off an island off continental Europe.  That isolated position was, of course, a far better place to pursue her scientific calling than Berlin or Prague.  She's not in Wikipedia because of the peculiar bias of that omnipresent but not omniscient organ.  Tom Simonite points out that the diminishing number of contributors to Wikipedia are overwhelmingly male and that you need to be a bit geeky to write copy in such a way that Wikipedia will accept it (the articles are written in a kind of hand-cranked code similar to the HTML I used for writing web-sites in 1995). So nobody there has chosen to take their hat off to Delap. As you might expect, she does merit a page in  Mary Mulvihill's great compendium of Irish science Ingenious Ireland (2002) which I've cited before.  More surprisingly, because of its shameful coverage of Irish science, Delap has a respectable entry in The Encyclopedia of Ireland (2003). 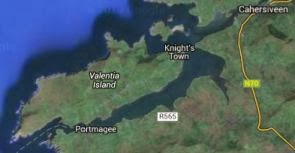 Delap was one of ten children of Rev. Alexander Delap, the Church of Ireland Rector of Valentia.  She arrived on the island as an eight year old and was educated by her father and the great outdoors, partly because there was no protestant school on the island.  He was a keen amateur naturalist and his interests fed down to his children, but especially to Maude and Constance, who spent all their spare time in  rock-pools or trolling lines and nets from a row-boat. Living her entire life in (a boat off-shore from) one small community and being engaged and curious, she got to really know her bailiwick.  She reminds me of Barbara McClintock in her pursuit of the small in order to understand the great mystery of life.

Her immortal fame rests in Edwardsia delapiae a peculiar, rare sea-anenome, autochthonous to Valentia,  which she discovered and which was named after her by Carlgren and Stephenson in 1928. She knew it was rare and interesting because Cnidaria were her special field.  They are interesting because many of them have alternate generations switching between a sedentary polyp and a free-swimming medusa form. For a long time these were considered to be totally different species and one of Delap's key contributions was to catch the microscopic medusae as they were shed at sea from a polyp and bring them into the lab to see what they developed into. She was able to tie the knot between several of these mystery pairs.  To do so required classic creative, dogged science, because these tiny sea-creatures are fussy about their living conditions and, if you look at them sideways, they die.  Directed and informed trial-and-error enabled her to get the conditions right, changing the water regularly (without flushing the objects-of-study down the sink), bubbling air through her aquaria and carefully controlling the temperature were some of the steps that needed her attention and whose parameters she had to determine, record and replicate.

Maude Delap's existence was the inspiration of Tom and Dorothy Cross's Art-Science collaboration about jellyfish.  But rather than drizzly dull Valentia, they chose to make the more melodramatic box-jellyfish Chironex fleckeri the star of their project and spent most of their time in Northern Australia where C.fleckeri zooms about occasionally killing people.  There's another post to come on the nature of the toxin, but that's not relevant to Jellyfish Goddess of the North Atlantic.

She was interested in everything around her: a bit of archaeology, or folklore or local history was grist to her mill and she was a competent botanist.  And lest you think that her interest in zoology was limited to cnidarians, she was the first person to obtain the complete skeleton of True's Beaked Whale Mesoplodon mirus.  When I say 'obtained', it would be more correct to say 'created' because her specimen beached itself on Valentia and she had it hauled up to the garden and buried in the cabbage patch to hasten the de-fleshing and presumably control the smell. These creatures can grow to more than 5m and weigh in at more than a ton.

Her Victorian father, with his extensive brood, could only afford to educate the boys and wouldn't allow Maude or the other girls to leave the family home unless transferred to another man in marriage.  But even after her father died in 1906, Maude refused the offer of a job in the Plymouth Marine Laboratory. Plymouth was a long way away before Ryanair and she spent the next nearly 50 years contributing to science from remote Valentia Island. I suspect she stayed because she was happy where she was and doing what she did.
The Blob's women in science series: Florence Nightingale - Barbara McClintock - Maude Delap - Cliona O'Farrelly - Lynn Margulis - Rosalind Franklin - Jocelyn Bell Burnell
Posted by BobTheScientist at 06:04