Seems like yesterday, but it's 200 years since Alfred Russel Wallace was born 8th Jan 1823. He was thus just 14 years younger than Charles Darwin, about whose bday we I have been making a great fuss - donuts etc. - for the last 40 years. It seems appropriate to at least flag the great man's birthday with a cake [go Laura]: 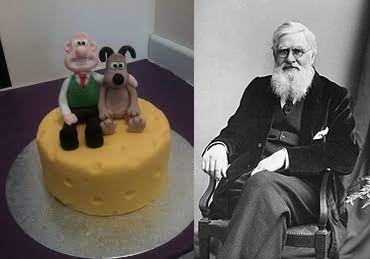 Wallace always deferred to Darwin and considered his contribution incidental to the process of getting the Origin of Species into print. Shout out to John "finch-sorter" Gould who gets even less press for guiding Darwin to the path of righteousness. Wallace had his insight into the power of natural selection to drive evolution while tossing in a malarial puddle of sweat at Ternate in the Dutch East Indies. Darwin had priority on this idea but had been in a decades long turmoil, lest publishing his arguments for species mutability would topple his seat at the table of British scientific patriarchy. Wallace's scooping letter from Ternate forced Darwin's hand and his pals arranged for a reading of the Darwin Wallace joint papers to the London Linnean Society in 1858. That event created almost no stir at the time. It was Darwin's [sole author] book published the following year that set the cat among the patriarchal pigeons.

Mainstream science tends to double-down on this attempt to fade Wallace from the story and big up the vaccillating Darwin. The Man gleefully cites Wallace's skepticism about [smallpox] vaccination and unskep about spiritualism and call him cranky. But I reckon we need more Wallaces about the place who bring a sharp mind to discomfit the cosy certainties of the establishment and force us to think and sift evidence rather than parroting what we read that morning in the Guardian [insert your favorite organ of the echo-chamber here]. Happy Birthday Alf!

If you want more information, and you should, check out the Wallace Memorial Fund WMF, patron Bill Bailey.