It's been 8½ years since we looked at the Whiskey War between the sovereign nations of Denmark and Canada over the 130 hectares of Île Hans Ø = Tartupaluk in the Nares Strait between the extreme N of Greenland and Nunavut. The strait is 35km wide, folks travel, hunt and fish here, oil might be discovered so everyone needs to know where they are and in which jurisdiction their kayak floats. For two civilised nations, not currently at war, and both members of NATO, surveying the mid-line of the strait was easy . . . except for Hans Island: plunk in the middle of the fairway. Both sides claimed sovereignty of this barren lump of Silurian limestone. Nationalist sentiment would periodically surface in the press in Copenhagen or Ottawa or more likely Nuuk [pop 18,800] or Iqaluit [pop 7,500], the provincial capitols of Greenland & Nunavut respectively. An expedition would be sent to claim the island, the Nation I flag would be hauled, respectfully, down; Nation II's flag hauled, patriotically, up and a bottle of ardent spirits left at the foot of the flagpole.

Nunavut: such a cool flag

This Spring, Russia invaded Ukraine and NATO was put on its mettle. If NATO soldiers from Denmark and Canada were going to be mobilised to the edge of a real war, then a pretend war throwing shapes and swapping whiskey was looking picayune and poor for propaganda. Accordingly, diplomats from both constitutional monarchies sat round a table, agreed on broad principals and sent their surveyors to the Arctic. 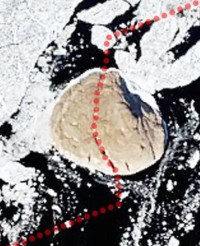 On 14th June 2022, Hans Island was formally CA-split-DK in a way that both sides considered A Win. The border follows a natural geophysical feature in the form of a slight depression curved across barren landscape. Better pics at Atlas Obscura. That's the essence of any successful diplomacy and a fair bargain. Now these Western nations can turn their attention East. Note that there more than twice as many Ukrainian Canadians [1.3m = 4% of the national pop] as Russian Canadians [600,000].

Other armchair commentators have noted that up until this Summer, both Denmark and Canada had a land borrrder with only one other country. At 8,890km, the land border between Canada and the USA is the longest in the world - 30% longer that that between Russia and Kazakhstan. But the 1,200m new land border is not the shortest in the world.  That record is claimed to be the 150m stretch in the middle of the Zambesi between Botswana and Zambia at the apex of the Caprivi Strip. Actually The Blob begs to differ: the border between the Spanish was-an-island Peñón de Vélez de la Gomera and Morocco is only 80m long and a lot drier land across the beach than the Zambesi.