Last refuge of a scoundrel

. . . is, like, patriotism - according to Dictionary Johnson [whom prev]. I was induced to think about it because of a Mefi thread about what constitutes un-Australian attitudes and actions. Seekers know what I am an Australian is about. And the kids buy in.

Needless to say, for the majority of MeFites, the Pacific is Big and Australia is on the far side, so the discussion chimed in with USian and Canadian manifestations of Patriot Games. I've cited John Cena's inclusive America before: it's interesting because his monologue brings atypical Americans to the fore and suggests that they, too, are essential cogs in the ship of state and require the respect of The Majority. Obvs, I like it also because he lurries out some counts [to the nearest million] of various groups: Lesbians vs Virginians; mothers vs soldiers etc.

Elsewhere in the thread, someone cites a series of funny ads for Molson reflecting on who claims I am Canadian. In the shadow of the great francophonie ~22% v Anglo 75% dichotomy there are A Lot of other languages spoken in family kitchens when nobody is looking: Mandarin, Gujarati, Inuktitut . . . Not knowing all the words of O Canada doesn't make you unCanadian is one of the messages. And really let's cry nonsense on Citizenship tests everywhere that require immigrants to know the deputy leader of the opposition in parliament or some other University Challenge variety of cultural imperialism.

This all made ponder on performative patriotism in Ireland and language. Much political hay is made of Irish being the primary language of the state, and its constitution, despite being spoke fluently by only a tiny minority of citizens, let alone residents - who can ex officio be citizens of any country in the EU.  The national anthem The Soldier's Song was written, in English, by Peadar Kearney, at Christmastime in 1909. It wasn't until after the Easter Rising in 1916 that Liam Ó Rinn translated it as Amhrán na bhFiann keeping the same tu♬e, of course. One of the most wonderful things about Ireland in the 21stC is existence of polskie sklepy  all over the country and all the other manifestations of cultural diversity, choice and multiplicity of ideas, foods, songs and dances. 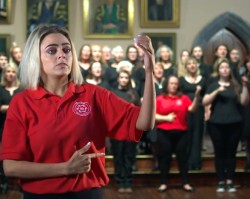 It occurred to me that some enterprising inclusionist from the Department of Foreign Affairs or Arts Culture and the Gaeltacht might have translated The Soldier's Song into Polish seeing as it is, by numbers, the second language of the Republic. Seemingly not: you can get Polish subtitles but no Polish poet has been commissioned to make version that is stirring not stilted. Shame really, because like the Latin mass, if you don't understand what the words mean it is hard to get on board with the concepts. Although the concepts in the lyrics are a bit dated? . . .come woe or weal / 'mid cannons' roar and rifles peal. Whatever about Polish, at least 9 people are agreed about what the lyrics are in ISL [R].

The Chinese government doesn't want their citizens to get too literal about the National Anthem: "Rise up, people who don't want to be slaves." struck an awkward and censored note during the persistent Covid lockdowns in the PRC.