Chicken? Can't be bothered. It is fearsomely efficient at converting meal into meat but, brother, it ain't natural to grow from 2oz=50g at hatch to 4.5lb=2kg in 42 days having eaten 6.75lb=3kg of feed [feed conversion ratio 1.5]. imo chicken tastes better than soya beans, but that's a very low bar and not low enough to swallow the ethical issues of factory chicken. But at least you know where you are with cheap chicken; adding slogans like "organic", "free-range", "corn-fed" requires an additional level of skeptical enquiry about those words really mean. "free-range" often means has access to the outdoors but the door is hella small, at the other end of a vast shed and all the food is inside . . . where it is warm and dry. Talking to a palomino a while back, who claimed that their latest cheap chicken filled the kitchen with the smell of herring when cooked; presumably because that month fish-meal had been cheaper than soya-mit-corn. 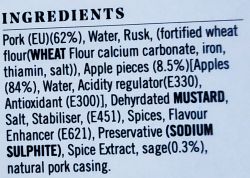 One of the local supermarkets took a punt on packets of Saustainable Sausage from Olive Pork outside of Drogheda, Co Louth. But not many folks took up the offer and we acquired a packet from the remainders almost sell-by shelf. Sustainable is an unsettling adjective to use because, to me, in a food context, it conjures up survival bunkers, desiccated beef chips and bins full of dried beans. I quipped with a neighbour that she could eat as much as she wanted because it was engineered to last forever. Actually, the apple & sage sustainable sausages are fine, but I doubt I could blind taste them different from Clonakilty, Tesco, Denny, Galtee reg'lar sausages. 62% meat is about average for Irish sausages [but rather less than Tony O'Regan's and a lot less than JP O'Connor's] which are habitually adulterated with meal - it's not chorizo, lads. The apple pieces are only 84% apple and the sage is the last, smallest contributor to the mix at 0.3%. And all the usual suspicious suspects E300 E330 E451 E621 [that's MSG] are thrun into the mix to make sure it gets to the plate without crawling out of the supply chain.

The sustainable tag is pushed because these porkers are fed on spent olives - the cake that is left after all the oil has been extracted from the fruit. That's a nice idea, in a Simon Fairlie sort of way - pigs are ominivores and will grow fat on stuff that we cannot or will not countenance on our own plates. But Fairlie feeds his pigs from weeds and kitchen scraps; not olive cake which has been shipped halfway across Europe from the nearest cheapest olive groves. And, as with the fish-meal chicken in the 1st para, it's possible that the pork tastes a bit olivy before that scent is overwhlemed with the apple, MSG, sodium sulphite . . . and the dusting of sage.

As y'do, I googled up this product and came across some really bizarre statements on MummyPages.ie which appear over the Olive Farm by-line: after a lorra guff about Omega 3 and its effects on mood we get "Lastly, the pork meat that Olive Pork use is from the shoulder meat. Shoulder meat has many connective tissues as it connects the body, legs and head. This means that the meat in pork shoulders is high in collagen". WTF? Are we, like, 6 years old? Yo toe-bo♬e's co♬♬ected to yo foot-bo♬e etc. etc.