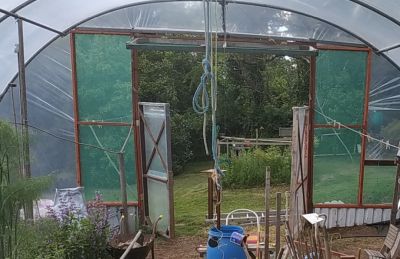 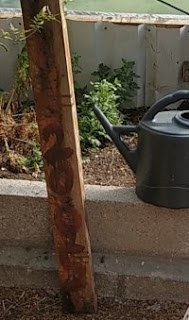 I have this fantasy that hay-barns in Norway are a) made of wood b) painted/stained rust red. We just wrapped our polytunnel refurb project. Like a dentist, some rotten material had to be cut out and replaced with sound stuff. That turned up some more evidence that the tunnel was constructed in 2005 [R]. First R & K cleaned the plastic: stoutly asserting that 17 years was young: so it really did not need replacement. Then they rebuilt the semi-circular ends: notably by re-pleating and stretching the plastic. But more importantly by replacing [see before] a 1 metre wide section on either side of the doors with draft-buster builder's netting to improve the ventilation [shown above]. In Ireland the biggest problem with polytunnels is over-heating rather than freezing. 20 minutes after the sun comes out from behind the clouds of the last shower, the temperature can increase 10°C. 12 sq.m. of extra ventilation might dilute the hot air. The other thing that's been upgraded is the steel 'profile' sheets which separate the bottom of the plastic and its associated timber framing from the wet and microbe-rich earth. Timber, even deal softwood will last for a long time so long as it is kept dry - think of the joists, rafters and floor-boards in your own home - but in the damp, not-so-much. The original 2005 profile was imperfectly buried and so needed a succession of futzing blobby intermittently successful solutions [involving wooden stakes, rocks, chicken-wire and sand&cement] for keeping sheep in the tunnel, and rabbits & rats out.

You can see the new tidy tunnel-end at the post-head. I spent two days on my own after the lads had finished carpenting, slapping fence preservative on any timber that was exposed to the weather: hence the Norwegian wood crack in the title. 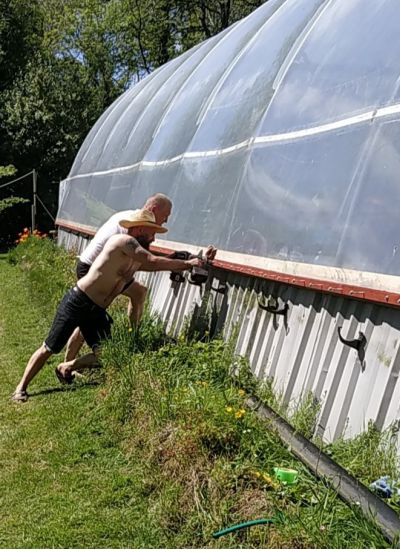 The final stage of the refurbishment was to get an extra screw of tension on the plastic along the 17m sides of the tunnel. The standard practice in 2005 was to wrap a few turns of plastic round a [series of] 2x1 lath[s] and screw that swissroll to a 4x2 timber that was bolted to the hoops of the tunnel . . . the ends of which were embedded in massive concrete footings buried in the ground. 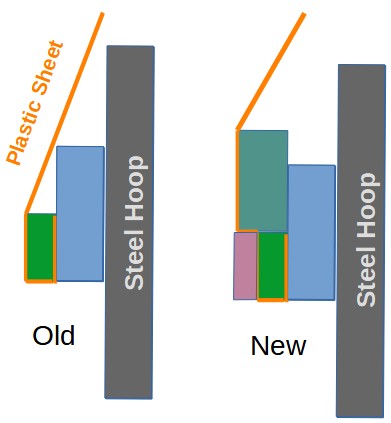 R & K are seen above screwing a new Norwegian stained 2x1 lath through the olde punky 2005 2x1 lath and into the structural 4x2 beneath.  But first they have wedged a 3x2 spar between the plastic and the original 4x2 support rail. This has the effect of getting an extra bit of tension on the plastic so it finishes up drum-tight. K maintains that he's not happy with his tunnel if you can't hear bees dup dup drumming against the plastic. Any play in the plastic is going to wear it out as it fraps in the wind against the steel and timber framework. The boys are leaning in to the work with a couple of impact drills using the threads of the hex tek screws to inexorably crimp the timbers together against the spring of the plastic. This adds an addition inch of tension in the sheet.

Like I said, we covered the tunnel with plastic in Summer 2005 on a warm calm day in July. We made a meitheal out of it, enticing about a dozen frends&relashuns with the promise of barbie and beer. It's handy to have that many arms to really pull the plastic tight before screwing it to the support rail. [Commercial operations forget about timber and attach the plastic to a steel tension bar which may be club-hammered down the steel hoops to which it is attached: that way a couple blokes can do the work of our dozen. I'll also add that a pair of these patent tension bars will set you back €1,500+]. Our dozen otoh, which uncomfortably included three alpha males, achieved a really tight stretch but failed to attach the batten with sufficient screws. About a year later, when I was the only adult on the property with two tween girls, there was a bit of a blow, one of the screws failed and half of one side of the tunnel unzippered itself from its foundation. That was the first [but not the last] time that 11y.o. Dau.II got to drive a cordless drill while her sister and I pulled the edge down as . far . as . we . could. 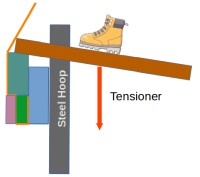 But that corner of the plastic was still manifestly too high; which meant that it was a long way from the gutter which was trending downwards to the collection barrel; which meant that a lot of the rain-water missed and dribbled down the wall.  Oh, we can fix that, said the boys, we can use Archimedes: levers, like. Who's heavier? R is heavier? He can spring about on a spar inside the tunnel; while K says a little more . . . a tad less from outside with a great big tek screw ready to capture the win.

All in all we've given the poly-tunnel a new lease of life; perhaps not 17 years but I'm confident that the structure will weather whatever End Of Days storms can throw at it this Winter. In the run up to the works, the tunnel was substantively de-cluttered and tidied by Dau.II and The Beloved; which adds to the pleasure of being there. I've redone the clothes lines as well so they are less floopy and in your face. Just needs a really comfortable sofa.