How do you identify? I have recently embraced being An Old, but I don't tbh click heels with delight at being a grandparent, although many do, who can. For all my adult years I've considered myself to be EUropean even when [1973-1993] I was strictly EECropean. That was from an ambivalent attitude to the count[r]y where I was born and which I left at the age of 19.  My current book has given me a new sense of identity - as well as being An Old, I am Old Internet; note to self - get a badge made. 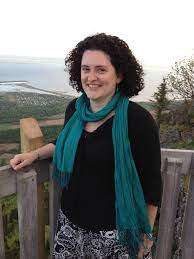 Dau.II put me on to Gretchen McCulloch [R], Lauren Gawne and Lingthusiasm, their chatty, fun informative podcast getting enthusiastic about linguistics. Working through four years of back-catalogue, there have been references to Because Internet, Gretchen McCulloch's book on "Understanding the New Rules of Language". I was surprise and delight when I saw that the book was available on the Borrowbox's patchy and eccentric catalogue of audiobooks. Old Internet People [meeeee!] were there before pretty much everyone else. I was using the internet reg'lar for ten years before Tim Berners-Lee invented the WWW. I created an WWW-server and wrote an early Irish website using hand-cranked HTML. I spent rather tooo long, on company time, making 8px x 8px .jpg icons for the ToC for embnet.news, the newsletter of the EUQuango of which INCBI was the Irish node. McCulloch identifies another cohort of Pre-Internet People; these are people of my age who ignored the internet for the longest possible time. These old buffers are really likely to identify as grandparents because they came aboard only/mainly to see photos of distant grandchilder and <ooo frisson> occasionally Skype them.

Another key question for binning the demographics is "did you embrace the internet before or after your parents". Teens keep shifting the territory on which they communicate - Bebo, Facebook, Insta, Tiktok at least partly to be in another room than their parents. Comparing, flirting, checking, nattering are just about impossible if Mum can overhear. Why, it's almost as mortifyin' as knowing your parents have sex. McCulloch is a scholar and a linguist. She's interested in how language is used; like many linguists she's a descriptivist rather than a judgmental proscriptivist. And the internet provides a huge, already transcribed archive of how actual real people talk with each other. This is different from the language used when a linguist is among them taking notes, or when they are writing an essay for school.

When Pat the Salt retired 30 years ago he had a kitchen table with a distant view of the sea and a manual typewriter about the same age as himself. He set about writing stories about his life and times in Africa. Wanari the Salt-trader is wonderfully evocative of a different place and time. Like The Blob, Pat's typings became a daily stream of consciousness tale of events real and imagined concerning people he'd known back in the day. Salty tales of Mountbatten of Burma, whom Pat met in Nigeria in 1965, and his champagne lunches with an androgynous tennis-coach. The magnum opus filled many many xerox boxes of recycled paper. Slightly more than strictly necessary because Pat would . . . use . . . ellipsis . . . to space . . . his thoughts. This form of punctuation is, according to Gretchen McCulloch, widespread in some arenas of the internet. It indicates a chummy informality, partly because it is transgressive of the punctuation rules learned in school. McCulloch traces the habit back to another era and another medium - PostCards - and has analysed a database of hundreds of PCs sent to Ringo Starr in the 1950s and 1960s.

Informal comms tell us far more about who we are, what we care about, who we care about, than any of the newspapers of record, formal biographies and stately histories with which librarians like to fill their shelves.

My audiobook of Because Internet is read by the author which is good. As a media commentator with a good ear, she is acutely aware of the medium and has explicitly acknowledged that the spoken word has additional facility for conveying meaning [tone, timbre, emPHASis] which aren't possible in print. BUT it is less easy to catch some important nuances of internet comms: Capitalisation is one example; lol is not the same as LOL. Using the uc/lc conventions of your peers is an important gauge for whether your interlocutor is one of us. McCulloch makes several concessions to make the audio-book a separate product to the dead-tree version. My audio"reader" has a speed button where you can make the voice go 1.25x or even 3.0x faster than it was dictated. That's great if your return deadline looms and you want to finish the book. I might recommend listening to Because Internet at 0.75x speed because nobody would accuse McCulloch of speaking a languid Southern drawl. However, in whatever medium, at whatever speed, read this book, it explains so much about current discourse.