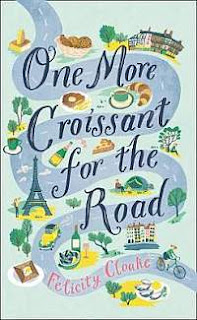 Borrowbox, the audiobook lending service, is rather patchy in what it makes available. But that's a good thing because it forces me to choose outside of the comfort bubble and perhaps be happily surprised. For example, I'm not really a foodie person and deplore the number of cookbooks which we have at home unopened from one year's end to the next. Elizabeth David's [bloboprev] classics are still worth reading 30 years after her death because she'd been there, done that in the 1940s and had something to say from her lived experience. Felicity Cloake writes a foodie column for the Guardian which Dau.II reads for fun and information, so I've heard of her. And I thought the cover was interesting . . . so I reserved and downloaded the tale of her road-trip round France in pursuit of the perfick croissant [R]. As you can tell from the bottom right corner of the illustration, this [2,000km] road-trip was largely carried out on a bicycle; with some train-connexions to skip the boring bits. Actually I think Cloake and I would agree that there are no boring bits in rural France and she was regularly surprised by the quality of croissant, lunch or dinner in really quite unprepossessing relais & roadhouses.

The conceit was that she'd sample croissants across the land for buttery, crispy, puffy, deliciousness and give each one a mark out of /10. There were some dire 3/10s on the journey and only two 9.5s. But neither man nor woman can live on croissant alone and Cloake draws on her extensive network of francophone gourmands to secure reservations at a series of fancy restaurants to pitch for The Best examples of the classics of French cuisine: boeuf bourguignon; tarte tatin; tartiflette; poule au pot. So much reduced stock, so much double cream, so half bottles of rouge; so much butter. Working up an appetite converting your flabby London calves into knotted whip-cord is the perfect antidote to this coronary-inducing rich fare. One of the joys of France is that plonk is so cheap you don't have to think twice about adding a generous glug to the cooking.

I don't think recipes do as well in audio as on a page but, like Elizabeth David, the recipes are embedded in the terroir full of options so sound adventurous and empowering rather than depressingly proscriptive. My experience in the kitchen is that you have quite wide leeway in quantities and ingredients before you construct something that is inedible. Recipes that convert 1oz to 28.5 g rather 30g are probably not written by a cook.

There's a lovely moment right at the end of the book, when Cloake and Eddie Merckx, her sturdy wheels, arrange to meet a pal with chanpagne under L'Arc de Triomphe in the middle of Paris. Having been told off for a) having a bicycle b) swigging bubbly under a war memorial, she is approached by two gendarmes. But rather than giving her a further wigging, the two lads are just interested in the bike and the journey. Full of admiration, the younger cop steps back and raises his cap: "Chapeau, Madame!" Formidable and, like, Ouf!