I have an old friend who was a commercial lawyer in London who was the World's best negotiator when it came to buying and selling airports and powers-stations. Heck, somebody has to do it and you might as well give the business your best effort. Years ago we were comparing notes over a bottle of red and he told me of a recent coup when, after 3 days of hot and heavy negotiations, at 0230hrs on the last possible day to strike a deal, his team added [or subtracted, I forget] a clause in the contract which was worth $1,000,000 [or ¥1,000,000, it doesn't matter] to his company's bottom line. The amount doesn't matter so much as the sense of putting one over on the opposition. I guess it was framed as "Okay okay, we're all tired, we'll give you THIS, if you concede that", and sleep deficit, the need for shower and a glass of orange juice clouded their judgment. 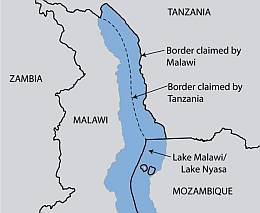 The Brutish Empire, on which the sun never set, was represented on maps of the era as a lot of dark pink territory. In 1930, a wide swatch of pink joined Cape Town and Cairo even if the projected railway between the two never quite materialise. One of the key outcomes of WWI for this project was the gain of Tanganyika from Germany at the treaty of Versailles. On the other side of the continent German Cameroon was partitioned between the victorious British and French; while the protectorate of Togoland was ceded entirely to the French. I'm focusing on Lake Malawi now because my Philips Schoolboy Atlas has revealed another [prev China - Korea - Russia triple point] peculiarity in the borderlines. I can't easily show you the evidence because Africa is a double-page spread and L. Malawi is mostly in the gutter margin. But the map [here R] indicates the scope of the issue. My [British] Atlas shows the border tracking the lakeshore from the Songwe River in the NW all the way down to the border with Mozambique. From there, the border jinks abruptly into the middle of the lake, which is shared between the two countries.

WTF?! This means that visitors to the resort of Mbamba Bay [Maps] may disport along the beach but need a passport and visa if they choose to swim. Indeed, it's worse than that because, over the last 120 years, a small river has blurfed about 1 hectare [L with red dots added for emphasis]of delta silt out into lake beyond the border.  If we follow the reasoning of SCOTUS wrt the Ellis Island foreshore and landfill, this part of the beach smells decidedly like Malawi. In contrast to Peñón de Vélez de la Gomera, where similar short-term geological events have changed the shoreline in Africa, Malawi has not yet chosen to garrison this outpost of her territory.
Q. Why am I sure about the 120 year timescale?
A. Because the Heligoland–Zanzibar Treaty / Helgoland-Sansibar-Vertrag was signed 1st July 1890.
This treaty ceded two islands central to the political ambitions of the German and British Empires. Helgoland [170 hectares] guards/threatens the entrance to the Kiel Kanal and the posts of Hamburg and Bremen. Zanzibar [250,000 hectares] otoh has a lot of cloves Syzygium aromaticum. The
disproportionate 1:1000 calculus was recognised at the time: Ex Chancellor Otto von Bismarck characterised it as exchanging trousers for a button. But that was partly to belittle his recent replacement Count Leo von Caprivi.
At the same table some other details delimited the spheres of influence of these two rival powers. It looks like, which the name of the treaty confirms, both parties were focused on the islands but the British negotiators were playing hard-ball with the small print. Look chaps, we own Heligoland and you want it. Do you even know where this Lake Malawi is? Our natives do a bit of fishing on it. What? not trout fishing my dear fellow . . . it's of no value to us either but we could concede Heligoland for this bit of a lake . . . and Zanzibar and Pemba of course. Shall we break for lunch and sign afterwards? there's a rather fine claret to go with the beef. In due course The Protectorate of Nyasaland became Malawi and Tanganyika became Tanzania [after it merged with Zanzibar!]. But, as we saw with Machias Island and Märket Island these treaties between colonial powers carry a lot of weight. JStor-walled James Mayall 1973 The Malawi-Tanzania Boundary Dispute. The Journal of Modern African Studies , Dec., 1973, Vol. 11, No. 4 611-628 has documentation from 1922-1972 but doesn't add much light.
There's more to come in the story because the Caprivi Strip was also part of the Anglo-German Treaty of 1890 . . . same continent different river.
Posted by BobTheScientist at 07:47