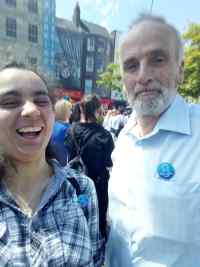 Dadical is a new coinage, as far as my daughters are concerned, having been applied to me yesterday. 'Popsicle' would have been possible except that it is already a word for something cool and refreshing: hardly applicable to The Da. Back in  April, Dau.I and I went on the March for Science in Dublin. The agreement was that she'd come out For Science if I would come out for The Gays. That was tentatively fixed as having a date with the Dublin Pride March on 24th June 2017. But 2 months is a long time in radical politics and I washed up in Cork this weekend because a) it was my birthday yesterday b) therefore Dau.II had bought us tickets for ProdiJig, a hoofer troop of which she is a fan. Here we are, Dau.I and her Dadical [Left for Rights! close-up below] wearing identical repealthe8th badges.

Because good things always come in threes, it turned out that Dau.I could get her pay-back and we could have a family outing round Cork city centre, by going on the local Repeal the Eighth rally, which kicked off at 1330hrs yesterday. Here  I explained the issues about the 8th Amemndment to the Constitution back in March. With two daughters in the 20s, I get to hear about those issues from the horse's mouth as one might say. A case could be made, and the girls are quite keen to make it, that only women of child-bearing age have a locus standi on the matter and they invite nuns, grannies and blokes of any age to just hold their whisht about the rights and wrongs of abortion. My late lamented, and rarely PC boss had a phrase "your rights end where my nose begins" which I am inclined to take up on his behalf. That's  a trip-off-the tongue way of articulating an overarching tolerance of diversity. Matter-a-damn what you do at home - eat pray or love whomever or whatever you wanted because it was none of my business. It's not a literal nose as the boundary - mowing the lawn or raising cain at 0300hrs on a week-night is not tolerable unless your neighbours all have ear-plugs.

One problem with Rights is deciding who is to vindicate them. I don't think that normal people would have much tolerance for a return to trial by combat in which the strongest, fastest or wiliest fighter was demmed to have found favour with the deity. We still haven't cracked the closely related problem of trial by lawyers because it is clear statistically that the richest person wins disputes a disproportionate amount of the time. It is more or less a sham to appoint a lawyer to fight for the dispossessed because they are hobbled by lack of money.  ANNyway the effect of the 8th Amendment as it has come to be interpreted is that the right to life of the unborn trumps pretty much any right of the mother except avoidance of her death. The vindication of this right has led to one high profile case, Savita Halappanavar's, which killed both mother and child and that doesn't seem to be the best possible outcome by an objective assessment. The right to life was brought into focus again in 2015 when a woman, 17 weeks pregnant was kept on life-support after sustaining a catastrophic internal blood clot that left her brain-dead.  The Hippocratic Oath is specifically against abortion but we don't need to adopt wholesale the ethics of ancient Greeks whose civilisation had a foundation of slavery in the silver mines of Athens. We could move to the 19thC with Arthur Clough's verse advice "Thou shalt not kill / But need’st not strive / Officiously, to keep alive." which I've trotted out before on end-of-life issues.

Here's the thing, right now we are in an 'every sperm life is sacred' era: caught between a life is cheap time when a child could be hanged for stealing a handerkerchief and an uncertain future. The trouble with Rights is when they are prefaced by a starement like "We hold these truths to be self-evident . . .".  To which the skeptical reply is Whoa! no we don't. Rights that were obvious to all thinking people at some time in the past are now considered repugnant to many. The rights of the unborn are a super-polarising concept about which it is hard to have a rational discussion. Discussion degenerates into a recital of anecdotes (I gave two, Savita H and life-support,, in the prev para); young women fall pregnant for all sorts of reasons and travel to the UK for a termination - at a rate of 10-30 every day so they already have the ability to safely become unpregnant. If The Patriarchy would just shut up, this Irish Right could be vindicated in an Irish clinic. Another place to start the discussion might be to suggest that we throw out the Absolutes - because we don't give an unqualified right to life to Syrian refugees, or starvelings in the Sahel or Somali pirates. We now live in a 21stC where 7.5 billion people are eating their seed-corn and despoiling the planet. Fewer people please: coral reefs, rain-forests and every species on the IUCN red list have rights as well as every person or proto-person on the planet.
Posted by BobTheScientist at 07:43