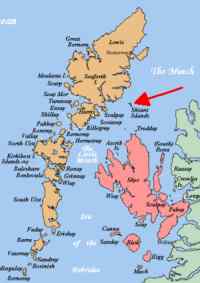 The Shiants = Na h-Eileanan Mòra are a navigational hazard in the middle of the Minch, the channel between the out Hebrides and the Isle of Skye and Mainland Scotland. There are 3 main chunks: Garbh Eilean joined by a spit to Eilean an Taighe and Eilean Mhuire to the East. The top most point on the map of the Minch [R] is the Butt of Lewis and it is inhabited by the Men of Ness. We've met them before going off on an annual hunt to Sula Sgeir in search of guga - young gannet Morus bassana - for the pot. I wrote about the hunt and the island because it featured a couple of weeks ago on BBC Alba. Now because things always come in twos, guga hunting came up again in my current book The Old Ways by Robert Macfarlane which The Boy gave me for Christmas in 2012. That was unfortunate timing because I was super-busy preparing classes for my new career in The Institute which started, with The Blob!, in early January 2013. The Old Ways sunk beneath a heap of notes about the pancreas, the ozone layer and logarithms.  I'm fairly sure I've read some of the chapters before but, with my two week event horizon, it was all as new.  In one Chapter, Macfarlane and friends sail an open boat from Port of Ness to Sula Sgeir [recently] as a two day there and back trip. When they arrive, they find that they have coincidentally turned up within an hour of the guga hunters - they are met with truculent stares and realise that they are Not Welcome.  Guga is very much acquired taste which is eloquently expressed by a crofter "I gave a piece to my dog and it spent all week licking its arse to take away the taste". Yum! 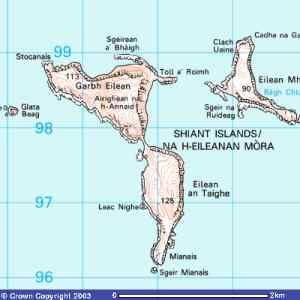 The previous chapter is about another open-boat voyage out of Lewis: from Stornaway to The Shiants. It is a small-small adventure for Macfarlane and his skipper the folklorist Ian Stephen. They travel the hwæl weg of ancient Anglo-Saxon poetry and indeed meeting a few Cetaceans along the way.  The Shiants are much more substantial than Sula Sgeir. Each square on the Ordnance Survey map above is a sq.km. = 100 hectares.  The names translate as Rough Island, the Island of the House and St Mary's Island. There is a bothy maintained on, and giving its name to, Eilean an Taighe the Island of the House. The place was privately owned and was made available to anyone adventurous enough to get there [no train, no bus, no airport, no ferry] by Adam Nicolson, grandson of Sir Harold Nicolson and Vita Sackville-West but the archipelago's website now refers to him as the previous owner because he recently ceded the fairy-tale to his son Tom Nicolson. The last year when there was an orderly booking system was 2015.  You will know something of Vita Sackville-West if you have seen Sally Potter's 1992 film Orlando. Which is to be recommended as is Potter's super film The Tango Lesson.

Mais revenons nous a nos oiseaux! It is true that there are sheep on at least one of the islands, but the place is really an amazing bird sanctuary with more puffins - about a quarter million - Fratercula arctica than you can shake a stick at. Confusingly Puffinus spp. refers to much smaller and drabber birds which we call shearwaters. French, sensibly or at least consistently, calls these chaps puffins. Sadly for human and avian inhabitants, the two larger islands are infested with black rats aka ship-rats Rattus rattus. Despite a number of the trapped specimens being brown in colour none of them were of the lab rat Rattus norvegicus species. That paper in the Hebridean Naturalist used a neat, appropriate technology, surveying tool call a rat-stick which is a piece of wooden kindling soaked in margarine and driven into the ground. Teeth marks in the wood indicated the presence of rats!

A few years ago the Daily Mail did a sort of Hello magazine piece on the Islands and the Nicolsons. Maybe put the Shiants on your bucket-list?

More islands
Posted by BobTheScientist at 07:47