Where do we come from II

One of the long running sagas in human genetics/psychology/anthropology/sociology is the nature vs nurture issue: to what extent we-are-who-we-are is determined by genetics (and more recently epigenetics) or by our upbringing.  The Lord famously answered a pestering Moses with a rather cross "אֶהְיֶה אֲשֶׁר אֶהְיֶה, ʾehyeh ʾašer ʾehyeh" which is usually translated as I am that I am (and please stop obsessing about the details).  But teasing apart the relative contributions can help in medical diagnosis and prognosis.  There is also a lot of unthinking nonsense trotted out by the press in response to press releases after interesting scientific findings.  Headlines like "boffins discover gene for homosexuality" happen

Yesterday I wrote about data for establishing the genetic contribution to our makeup.  By a neat coincidence this week the blogosphere is buzzing with a mega-neat set of maps that gives us some data on the nurture/environmental influences on who we are and where we came from. Language and accent don't appear to be genetic at all at all.  A Vietnamese girl adopted sufficiently young into a Carlow family speaks English and Irish like a native. But what elements of the environment dictate how we speak and what we call things??

Joshua Katz, a graduate student at NCSU (North Carolina State University)  has created some 10 dozen visually appealing and informative maps of English as she is spoke by US citizens.  His data is derived from an online survey created and administered by Bert Vaux and Marius L. Jøhndal of Cambridge University in England.  You can contribute to the survey here.  As the song has it "You say tomato and I say potato, you say egg-plant and I say aubergine and they're all Solanaceae". 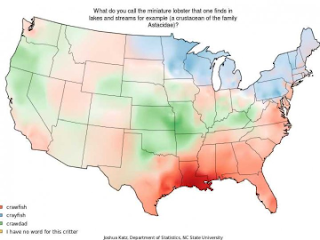 The Vaux project asks contributors a series of neutral questions to establish how people pronounce, and what they call, everyday things. Shown left: "What do you call the miniature lobster that one finds in lakes and streams for example (a crustacean of the family Astacidae)?"  The answers stream back: crayfish - crawfish - crawdad - dunno and get mapped by Katz. Don't you just love the use of Latin Astacidae in case the boys from the bayous are confused as to exactly what Vaux means?

I spent four years tooling around in New England and the Canadian Maritimes as a graduate student and as well as eating ice-cream by the quart and salad by the bucket, I ate my fair share of subs ("What do you call the long sandwich that contains cold cuts, lettuce, and so on?") but I also knew that they were known as hoagies, grinders, or heroes. - we were fairly cosmopolitan in the ecology basement.  But some of the answers to the Vaux questionnaire have me baffled: apparently some Americans buy their food in groscheries as if Jimmy Shtewart escaped from It's a Wonderful Life. Hours of fun there!

Katz is clearly enjoying his 15 days of fame.  He's eclipsed all the other Joshuas when you search for his first name on Google: bigger than Joshua Tree, Joshua Foer, Joshua Slocum?  That's big.  NCSU is riding interference for their media star.  If you want to have Katz speak on your local radio station: Please direct all media requests to tracey_peake@ncsu.edu at the NCSU Press Office.  And Before you email, please check the FAQ.  NCSU is sinking resources into the project "Special thanks to . . . the entire team over at RStudio for working tirelessly to accommodate the insane traffic demands".

Lucy Ferris in the Chronicle of Higher Education makes a stab at parsing the effects on her language of living for extended periods in several different parts of the USA at different ages.  Now if that sort of study could be increased from N = 1, it might give interesting insights into when our speech patterns are most labile.  Any fule kno that it is more difficult to learn a foreign language after puberty.  And what aspect of personality dictates that some Irish people adopt an American accent within days of getting off the boat and others are still lilting away decades later?

Finally, for those who speak English English, you need to buy The Linguistic Atlas of England (1978) a snip at £515.00.  A copy of this great (30.2 x 21.2 x 3.2 cm) book was on open access in the TCD library after it came out and I spent hours looking up the answers to "What do you call a long depression at the side of a field containing running water?" "What do you call the long, tapering, orange-coloured root vegetable with feathery green leaves?"  All sorts of clines, isoglosses, oddities and anomalies appear in the maps.  It almost made me wish I'd been born with the Arts-Block gene.


Posted by BobTheScientist at 06:11