I wrote about the executive power of examiners before yesterday's examiners meeting and was quite happy about the decisions we made in contrast to the story I told of another committee. The objectivity of the numbers was tempered by compassion and it was clear the The Institute's regulations had been informed by many other examiners meetings which must have experienced some pretty bizarre circumstances in the past - so here the codification by The Administration makes life at the coal-face easier.

The results are tabulated in PDF files and rather than print out a couple of dozen copies on trees, the PDFs are projected onto a screen so that all the examiners are on the same page.

PDFs (portable document formats) are designed to be read as (paper) documents so the 12pt % numbers in the boxes are barely visible at the back of the room.  As this is the only time that the sheets are scrutinised, could they not be written so that the numbers themselves (the data!) but not the surrounding bureaucratic guff were printed larger, so they filled their box?  Now here's another thing, the tabulated results for each student are printed on The Yellow Sheets.  Each column is headed by a course code "HS1278" or "CO5066" in the tiny 12pt print The Administration prefers, so the committee chair reads out the course name for each column.  You then know that your results are in Column 2 and you can ensure that the marks you gave have been faithfully transmitted to the official sheets.  And when there is a query about compensation or compassion, you can quickly resolve the issue because you know where the relevant data are and so does everyone in the room. Thus everything can be processed efficiently. Several different groups of students (repeat candidates, honours candidates, diploma candidates etc) may be sitting the same group of subjects, so their results appear on different sheets.  That's fine.  But the order of the course code changes for each candidate category.  The committee chair reads out the column names ... you then know that your results have lurched right to column 7 and can contribute to the meeting.  Over the day, 20 people listen to these readings-of-columns maybe 3 or 4 dozen times.  So the reluctance of The Administration to change their time-honoured practice doesn't scale up.  20 people * 50 yellow sheets * 10 seconds adds up to 3.5 person hours of extra time for the reading alone to which must be added the extra time required as old buffers like me forget that the column has been changed again and start questioning the official results.  Old buffers like me, not me myself personally.  An hour of Admin time two weeks ago would streamline the process downstream for this year and every subsequent year.

And while we're in exam season, I'll point you at an interesting set of data downloaded from an examination website in India by a student at Cornell last week.  Debarghya Das, who had sat the exam last year and who was a geek-colonel, was challenged by his mates back home in Kolkata (we used to call it Calcutta) to get them a preview of their marks before the results were announced.  Mr Das was not hopeful, but rose to the challenge and had a look at the site, to find a glaring security flaw in the coding of the site (javascript embedded in the html in plain sight) and a flaw in the way schools (numbered 001-999) and candidates (numbered within schools 001-999) were encoded.  So instead of getting the scores for a handful of his mates, he wrote few hundred lines of code and scraped the results of 200,000 students into an ExCel spreadsheet.  Ooooo data.  You can see some commentary on the exploit and on the practice of examiners across the world at metafilter.
You can follow the story which shows all sorts of weird anomalies in the data indicating either a) a flaw in the way marks are processed in India or b) a flaw in the way ExCel processes very large datafiles - see the metafilter link for suggestions. 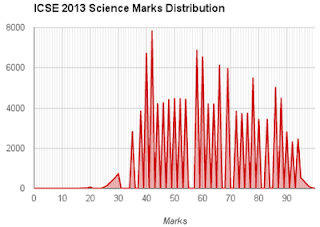 But I'll abstract one figure to show you where it's likely to be human finagle. The figure left shows the distribution of ~125,000 marks for the Science paper.  It seems that some marks are impossible to obtain. Notably, no candidate has scored 32, 33 of 34% on this exam.  The pass-mark is 35%.  So the examiners don't want to waste any time at their meeting on borderline cases.
As Bob's Law for Examiners Meetings - 2% of the candidates take up 50% of the time - probably applies in India as it does in Ireland, this is clearly a better way of streamlining the process than piffling about changing the PDF font-size.
Posted by BobTheScientist at 08:36