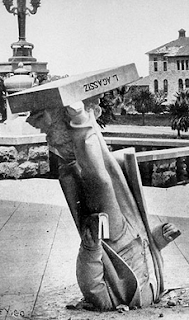 Louis Agassiz was born near Fribourg Switzerland in 1807.  He studied at Neuchatel, Munich and Paris under such enormous talents as Cuvier and Humboldt. In his early 20s, he carried out one of the C19th's monumentally detailed studies in describing the anatomy of Brazilian fish, brought back from a collecting expedition up the Amazon by Spix and Martius.  He also extended, codified and made true the studies of Goethe, Charpentier and Schimper on glaciers, morains, glacial erratics and cwms.  He was the first person to assemble the evidence for past Ice Ages.
When he was 40 he was was invited to lecture in America, blazing a trail that was followed by Charles Dickens, Oscar Wilde and Uncle Tom Cobbley.  But Agassiz stayed and became a professor at Harvard and founder of the inestimably wonderful Museum of Comparative Zoology.  A new biography of Agassiz by Christophe Irmscher will give you the nuance of this great, flawed, scientist, whom Irmscher characterises as distinctly undelightful.

In his day he was extremely well regarded, honored by having his name attached to a glacial lake, several  mountains, a crater on Mars, an asteroid, a couple of flies, a beetle, a cichlid fish and the desert tortoise Gopherus agassizii.  And Cambridge, Mass, named an elementary school after their famous adopted son.

He tends to get a bad press nowadays, because he continued to believe in the biblical version of the how the world came to be as we find it.  "The resources of the Deity cannot be so meagre, that, in order to create a human being endowed with reason, he must change a monkey into a man."  He annoyed the usually equable Charles Darwin (to whose ideas Agassiz was implacably opposed) to write “How very singular it is, that so eminently clever a man, with such immense knowledge on many branches of Natural History, should write such wonderful stuff & bosh as he does.”  Stuff and bosh, isn't that so 19th century?  But one of his 'attributed to' quotes "Every scientific truth goes through three states: first, people say it conflicts with the Bible; next, they say it has been discovered before; lastly, they say they always believed it." suggests that he was less doctrinaire than we'd like to cast him.

Particularly nowadays in the USA, your body isn't going to get exhumed and burned in public for espousing a belief in God-the-creator as documented in the Bible.  But another aspect in which Agassiz was a man of his time, seems to put a righteous hair across the ass of people today.  There is no doubt that Agassiz was a 'racist': be believed that "the white race" was superior to "the black race", he went so far as to commission a series of photographs of (naked) African-born slaves from North Carolina, so he had data to point out the differences.  And he lectured on the subject extensively.  There is no doubt that almost all the white people and, I daresay, a good chunk of the blacks who listened to him agreed with his thesis.  He died in 1873, 140 years ago this December. We've shifted our ground since then: we're much more of the thinking that "Those intellectual and moral qualities which are so eminently developed in civilized society, but which equally exist in the natural dispositions of all human races, constituting the higher unity among men, making them all equal before God."  Now who could have said that?  It couldn't have been the dreadful, reviled Louis Agassiz, could it?

Anyway, the Agassiz Elementary School, in Cambridge MA, was renamed in 2002 as the Maria L Baldwin School after a black woman who served as the principal of the school for over 30 years a generation after Agassiz died.  Very worthy.  By airbrushing Agassiz out of history in this way, however, it lessens the chance that people will look into their own souls and ask how racist they are themselves.  And if they come up squeaky clean in their conscience for now (it is so much easier to condemn other people than find fault in ourselves), they might then ask how they might have thought and behaved in the middle of the 19th century.  In 2010, an international petition to rename the Agassizhorn in Switzerland after one of the slaves whose photograph Agassiz commissioned was decisively rejected by the communities of Grindelwald, Guttannen and Fiesch, which surround the controversial peak.

And what's with the picture of Agassiz upended with his head in the concrete?  It looks like a statue of Stalin, Enver Hoxha or Saddam Hussein having being toppled by revolutionaries fervently giving shape to the new order.  Au contraire, Agassiz' statue was toppled from the facade of a building in Stanford University by his pal God, during the 1906 San Francisco earthquake.

Posted by BobTheScientist at 19:45