Here's a nice picture of the Taj Mahal - it looks like a water-colour  . . .  because it is: this is a crop of the standard postcard to show just the reflection (reversed).  Why today? Because it's the anniversary of Arjumand Banu's tragic death in 1631.  She has come down to us as Mumtaz Mahal the chosen one of the palace and she was married to the great Mughal Emperor Shah Jahan.  She was also the mother of the ruthless and austere Emperor Aurangzeb who deposed his father, executed three of his brothers and reigned for nearly 50 years.  All antient historie now. 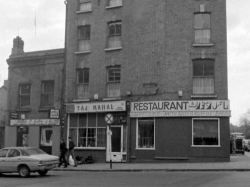 Modern history section begins here. The other Taj Mahal used to be on the corner of Lincoln Place and Clare Street just opposite the back gate to Trinity College Dublin.  Everything is on the interweb including a short history of Indian Restaurants in Dublin, whence I lifted the photo and this great vignette: "Larry Gogan’s ‘Just a minute’ quiz on RTE Radio 2. When asked ‘Where’s the Taj Mahal?’, a contestant famously replied ‘opposite the Dental Hospital’ ".  There's also lots of good stuff on early growth of the Indian community in Dublin and I've written about the exponential increase in Ireland's muslim community.

At about the same time that The Beloved was studying French and Arabic at The Other University, we went out for dinner at the (Dublin) Taj Mahal with a mutual friend who'd been born in Middlesborough but grown up in Ballinasloe - twas a long way from Indian restaurants she was r'ared.  This was long and long before chicken tikka marsala became the most popular meal in Britain, and the Taj put helpful notes in brackets (mild, medium, hot, very hot) after the dishes on the menu so as not to surprise the clientelle too much.

It was bit like the three bears in the fairy story. The Beloved plunked for Vindaloo (very hot) because her mother sprinkles chili on her cornflakes; I'm so boring (as child I always ordered plaice&chips at any restaurant) that I ordered something 'medium' and our pal cautiously picked a 'mild'.  It wasn't a bit like the three bears in the actuality.  We all struggled, none of the dishes was 'too cold' or 'just right', they were all, as we perceived them, flaming hot. How does that work?  Is it nature or nurture?  Can you train yourself up to tolerate chilis that create physical blisters in the naive?
Penguin photo credit.

Posted by BobTheScientist at 11:06