The money was good 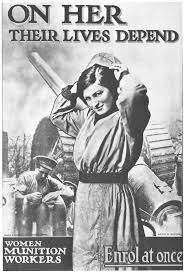 I've just raced through Bomb Girls Britain's Secret Army: The Munitions Women of World War II [2021] by Jacky Hyams and read by Helen "no relation" Lloyd. It is a series of memoirs captured from elderly women who had been born about 100 years ago which put them in their late teens, early 20s in 1940 when WWII suddenly got real. In the 1930s and 40s most young women left school at 14 and immediately joined the work force; always handing up the bulk of their wages to their mother. In 1938, teenage women in rural England either became domestic servants or worked in one of the local shops. The wages were derisory - 5 shillings a week was typical - and the hours were long. From 1940 onwards, there was a recruiting drive [R] for work in Royal Ordnance Factories ROFs making explosives & casings & filling the latter with the former.

Whatever about the propaganda, the word on the street was that that pay-packet was heavy [5x or even 10x what parlour maids had been getting before the war] and there doesn't seem to have been much difficulty getting willing labourers to manufacture gun-cotton, cordite, mercury fulminate Hg(CNO)2, TNT and pack them into bombs and cartridges. It was same-old same-old in the sense that there had been a similar drive in WWI 25 years earlier. The great majority of the shop-floor workers in ROFs were women: not all young, but those who where, say, 50 in 1940 weren't available for de-briefing in the 2010s.

One of the consequences of working with nitrates like TNT, cordite and gun-cotton was that these chemical were a) readily absorbed by the skin b) bright yellow in colour. Women working in those factories accordingly were known as Canary Girls. Those working at the ROF in Co. Durham were complimented as Aycliffe Roses by Nazi propagandist William "Lord HawHaw" Joyce; who also reminded them that the Luftwaffe had them in its sights.

My mother was visiting home in Dover on the first weekend in September 1939. When Chamberlain dropped his bombshell "This country is at war with Germany" at 11:15am my mother and grandmother promptly ducked under the heavy deal kitchen table . . . for a few minutes . . . before realising that Sunday dinner wasn't going to get cooked like that and they carried on doing what they'd been doing before. It was a bit like that with the bomb girls: propaganda-induced existential dread about Dorniers and Heinkels wasn't going to butter no parsnips. Indeed, they kept calm and carried on handling quantities of doubtfully stable explosive chemicals every day [or every night - the factories ran 24 hours a day on a three shift rota] and really living for the weekend when they could go dancing. Canny young-wans believed that there would be life after the war and started salting away a good proportion of their new found wealth. £1 a week for 5 years was a nest egg of £200-300 in 1945; when a new 3 bed semi-detached was about £1,500. A lot of the ROF factory workers came over from the Free State because the money was really good and prospects at home bore no comparison.

A couple of gripes. Helen Lloyd, the reader, gives her version of regional accents to match the location of each chapter but she doesn't ham it up too bad. Every chapter is, however, prefaced with each woman's name, when her husband died and how many children, grand-children and great-grand-children she had engendered. It's as if her primary purpose had been an incubator for peopling the planet: that's a rather retro framing for the 21st century.