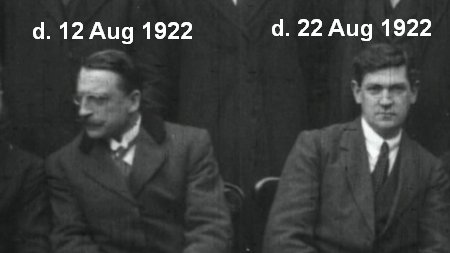 Today 12 August 2022 is the centenary of the untimely, but natural causes, death of Arthur Griffith leader of the Irish plenipotentiary peace treaty delegation to London (late Sept 1921 - 5th Dec 1921). That treaty was ratified by the Dáil on 7th January 1922. The vote was close but that's what democracies are about: a muddling along, compromising some of your cherished beliefs to achieve the best for yourself everybody. After the ratification the sitting President, Eamonn de Valera, who had sent the delegation to do the best they could, formally resigned his post and sought re-election on the 9th January. The vote on this was closer but, nevertheless, a majority of the elected representatives of the plain people of Ireland did not want him back. So Arthur Griffith was first president-of-the-executive or leader of the first post-treaty Dáil: in a sense the founding leader of an Irish state independent of Westminster. Sure, it wasn't a Republic; sure it wasn't the 32 counties; sure, the treaty ports were still the property of the Royal Navy; but it was a compromise that, as enumerated above, was what the majority of Irish people could wear at that time. As Michael Collins put it: "not the freedom that all nations desire and develop to, but the freedom to achieve it". The London delegation had been bullied but came away with a stepping stone to something more desirable.

But don't ask me! I wasn't there, my people were protestant land-owners who didn't have anything obvious to gain in a Free State but who welcomed the end of the War of Independence which had been busily 🔥con🔥fla🔥grat🔥ing🔥 Big Houses similar to my family's home place. Actually, don't ask anybody for their opinion on Saorstát Éireann, the Irish Free State, because we all have baggage on the subject:

In mid-June we had a bit of a jaunt to Allihies in West Cork. On the way there, we made a 1.5km detour south from the R585 at Béal na Bláth. The Michael Collins memorial [pic] was in the midst of contraflow traffic-lights behind a high builder's fence. Nevertheless I parked the car and scrambled along the nettle-thick verge to have a look at this place of Fine Gael / Treatyist pilgrimage. One of the engineers came to chat through the fence. A modest refurb was in progress <parking! altar! signage! bunting!> at this remote bend on a minor road to nowhere because an Taoiseach Micheál Martin (FF wearing his best Cork jersey) and Tánaiste Leo Varadkar (FG wearing a blue shirt) will be shouting their patriotic credentials with speeches on Der Tag 22 August 2022: 100 years after Michael Collins was shot there. Actually on Sunday 21st August. You may bet your best shamrock that RTE cameras will be there to cover the event. Collins had the historical good-fortune to die at the top of his game in a super-romantic way.

But the equivalent anniversary for Arthur Griffith, today, will pass [almost*] without a murmur. He is an awkward fit for people who want their history packaged as white hats vs black. Founder of, and ardent propagandist for, Sinn Féin through his paper United Irishman (1899-1906). . . Gaoled by the Brits for 9 months 1918-1919. Gaoled by the Irish for 7 months 1920-1921. Died of a bloody cerebral haemorrhage on his way to work in the office. He was only 51.

[*] Matt Shanahan, independent TD for Waterford has spearheaded a last-minute wreath-laying at Leinster House. Presumably at the Cenotaph - Ireland's largest invisible monument. Independent (the newspaper, not the political Effective) wades in with too-little-too-late finger-wagging.