I answer to Hey

Bob is not my real name! Nor is Blob. The name on my passport is common as porridge . . . in Scotland, and only slightly more exclusive in Ireland. I really don't identify with it; in the sense that I perk up when someone shares it. My adult kids each have a four lett name whch aint like that: I notice when those names trundle through my attention-sphere. Loada folks spull myown final famnm wrong despt being reall short . . . and common as bank; but that's for another day.

When I worked at The Institute, student names were supplied at registration and there was a helluva lot of on inertia trying to change them. One of the peculiarities of that train-wreck system was that common as fada Irish O' names were coded without the ' : O Reilly, O Shaughnessy. I always assumed that it was because three very similar glyphs have different unicodes:
' U+0027 apostrophe single-quote
‘ U+2018
’ U+2019
and only the first option was deemed necessary and sufficient in ascii, as 039. Some early IT person must have thrown up their hands and just left it blank. It was mildly annoying because the s pace in the n ame didn't always parse well when creating student lists for mark sheets from the official register, for which I expected First Name - Family Name. I really should have damped my expectations because I knew people whose handle didn't shoe-horn into that Western normality.

This-all came back to me last week when I tuned into an Ask.metafilter about whether Mac Beth was a new normal or legitimate variant of MacBeth. As often, the hive mind had some on the button comments. Like: "In Irish orthography, there is a space between Mac and the rest of the surname, e.g. Seán Mac Eoin, Seán Mac Stíofáin etc. In Wikipedia, therefore, a space should be included after Mac if the surname is in the Irish language. In English orthography, there is no space between the Mc or Mac and the rest of the surname" which refers to a revelatory Wikipedia article on respeck in Irish name-space. And Ó names are treated in the same way as Mac names when written in Irish "we refer to Máirtín Ó Cadhain . . . Tomás Ó Fiaich". Look l👁👁k that's a fada on the O and a space! That's why Irish names, in English, have an apostrophe - the accent has slipped off. 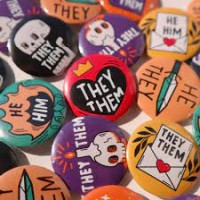 The very same day as the Mc Mac question was an earnest request for help about calling people what they want to be called. Asker was updating their corporate database so that employees were not saddled forever with what a long-ago bureaucrat decided was their name. Come now, it really shouldn't be so hard because The Patriarchy has long accepted and codified change of name on marriage. Blimey, is that the reason the women were obliged to retire from the Civil Service upon marriage? It was just too much trouble for Dev's boy's to change the name on the payroll?? Nowadays, people change their names for reasons other than adoption and marriage. In our part of society, it's okay to change your bathroom to get into a skin that feels comfortable. Not everyone accepts this [yet] and some people get all hot and bothered about it. Changing your name is often a part of trans-processing; and it's only polite to address others as they want to be called not what you-or-I judge them to be - Miss Ms TERF I'm looking at you.

TIL that several South Asian family-names are caste signifiers and who wants that when they've landed a $ix-figur€ salary at Google in  Dublin Docklands? My name is Rajesh N.

While we're here, that McAsk cites the definitive rhetorical list "Falsehoods Programmers Believe About Names" which opens a whole can o' worms . . . and don't get me started on «guillemets». Actually my quotes post is much more matter of life and death than french quotes.  And "My name is . . ." badges in hospital.