The Girl Who Invented Herself has been around the world a few times and seen a lot of indignities and injustice.  Since she was small (maybe since she read Anne Frank's Diaries?) she has reserved a part of her righteous indignation for The Holocaust and knows quite a lot about who did what to whom. Me, on the other hand, I've been less engaged in that polarisation of the human spirit. Sure, I've read, and rate highly, most of Primo Levi's books and have seen the movie Schindler's List and even mentioned Albert Göring on The Blob, but I know very little about Shoah. 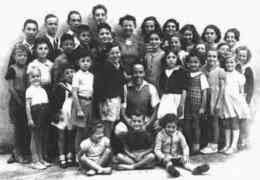 Accordingly, I wasn't surprised to realise that I'd never heard of Le Chambon-sur-Lignon: a Huguenot village isolated by religion and by distance deep in the Auverge in central France.  Then, a couple of weeks ago, I saw a review of a new book by Caroline Moorehead called Village of Secrets: Defying the Nazis in Vichy France which tells the story of how this community, with a population of about 2,500, snatched maybe twice as many Jewish refugees many of the children [R] from the teetering edge of oblivion and kept them safe and secret for the rest of WWII.  They were led by their pastor André Trocmé, his wife Magda and his assistant Edouard Theis, into giving house-room and sharing their rations and forging identity cards and running a school for the children. If you agree with Benjamin Franklin "Three can keep a secret, if two of them are dead", and given the extraordinary privations that war imposes on ordinary people, this is beyond remarkable.  One reason why I am vague about how many were saved is because nobody, quite deliberately, kept records and nobody bragged about how good they'd been afterwards.

Trocmé acted innocent for one Vichy official ”We do not know what a Jew is, we only know men.”  Here were people, a whole community of people, who did the right thing because they could do no other.  I had just about absorbed that information and found my brain melting at the thought of what it might have been like in Chambon in 1944; I couldn't begin to imagine what I might have done in similar circumstances.  Then, in the part of the blogosphere where I lurk, the news of Alexander Grothendieck's death started to circulate.  Who he?  A giant of late 20th Century mathematics is what he is.  There are parts of classical mathematics which, though hairy and challenging, can nevertheless be explained in principal.  I've tried, for example to show how Cantor proved that some infinities are bigger than others.  But Grothendieck's stuff is far too difficult for me, let alone for me to explain to you, but he seems to have changed how people thought about the world.  The New York Times obit does try to put him in context.  He was born in 1928 Berlin to a couple of wildly out-there people who were anarchist revolutionaries who escaped from Germany when the Nazi's came to power and sought asylum in France.  Hi father was rounded up and finished off in Auschwitz, but his mother and the young Alexander found refuge in . . . Le Chambon-sur-Lignon.  I know we're meant to buy in to the Talmudic theory "He who saves a single life, saves the entire world." - all people are equivalent - but not everyone can create a whole new field of mathematics, and win a Fields Medal [in 1966] in the process.

Posted by BobTheScientist at 06:32