Soddium?  Could it be some sort of mineral?  Or an element?  I reckon I know the names of all the elements,; not so I could recite them [whoop whoop Potter alert] maybe, but so I could recognise any of them if they came up in conversation.  But there is no element called soddium, apparently because of its assonance with sodium Na (element 11), but there could have been.  If Frederick Soddy had changed his name to Bloggins before he became famous for his work in radioactive elements, then it is a racing certainty that he would have been honoured by naming one of the trans-Uranium elements Blogginsium to give him parity of esteem with Einsteinium (99), Curium (96), Fermium (100) and Rutherfordium (104).  Maybe not, though?  You can just hear the boffins at IUPAC baulking at damn-silly name like Blogginsium.

Soddy [R] certainly was a major player in throwing light on our understanding the nature of radioactivity, the transmutation of elements and the components of radioactive decay. Oh, and it's his birthday today - 2nd Sept 1877. He worked in collaboration with the eponymous Ernest Rutherford, whom we've met cutting dead Fritz Haber (boo hiss, he'd behind you) at a Nobel Prize party.  He also partnered William "Argon" Ramsey in one of those "By God, Whistler, I wished I'd done that" experiments that separate the really brilliant scientific minds from the foot-soldiers like me.  He looks a teeny bit mad-staring-eyes to me but maybe that's because his collar is uncomfortable.

What Soddy and Ramsey did was get a lump of radioactive radium and set it on a stand in a glass vial of fantastically delicate thinness, they then enclosed that vial in another that was robust enough and thick enough to support itself when the interior was pumped clear of everything to become a vacuum.  They then crossed their fingers and left their little system alone for a helluva long time. Obviously they had some prior information to set it up just so; one fact being that whatever left radium to convert it to the "inert" but highly radioactive gas Radon was small enough and/or active enough to pass through molecule-thick glass but not through a great thick wodge of the same material.  After a suitable time had elapsed, they carefully sampled the invisible stuff beyond the thin glass and ran it through a spectrophotometer to show that it had the characteristic electromagnetic emission pattern of Helium, the second smallest element of them all, whose nucleus consists of two protons and two neutrons. Helium had previously only been known from observing the same pattern in the spectrum of the sun. They had discovered what became known as alpha-radiation, the least penetrative sort of radioactivity.  In 1913, Soddy discovered the more powerful beta-radiation at the same time as Kazimierz Fajans in America.  So both are acknowledged in the Soddy-Fajans Law of Radioactive Displacement by which Uranium (92) 238, the most massive naturally occurring element, waltzes down the periodic table through a succession of chemically different elements until what is left of the nucleus stabilises at Lead Pb (82) 206. 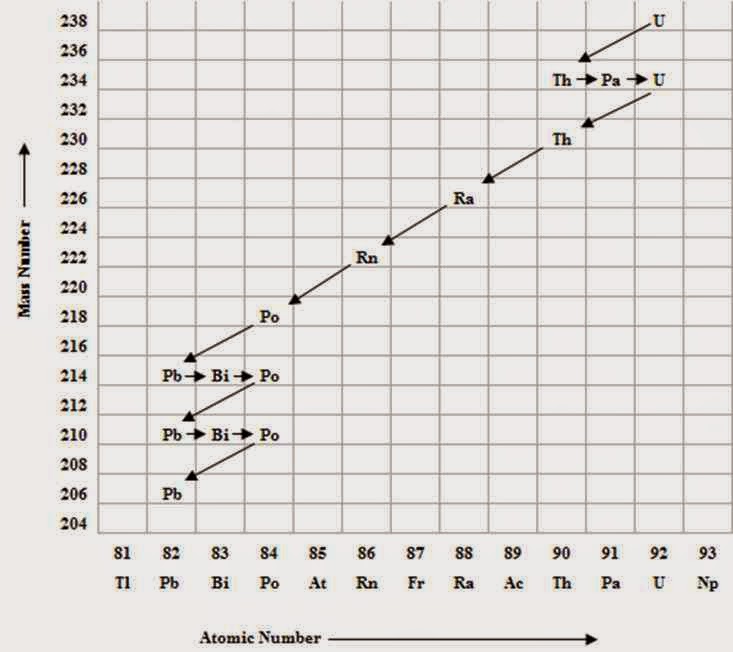 There are two numbers associated with each element, the smaller one is the atomic number which is a count of the (positively charged) protons in the nucleus which in turn determines the number of (negatively charged) electrons in the outer part of the atom which in turn determines the chemistry of that atom/element. The larger number is the atomic mass = the sum of the protons and the (uncharged) neutrons. In alpha-decay, a helium nucleus is lost so the atomic number slumps two points and the mass four points.  These are the down-left pointing lines on the diagram above. In beta-decay a proton is converted to a neutron by shedding a very energetic electron so the mass stays the same but the atomic number paradoxically goes up.  None of these ideas or experiments was what won him the Nobel Prize for Chemistry in 1921; that award principally cites his work on isotopes (anything in the same column in the diagram above), which you may read about yourself.
Posted by BobTheScientist at 01:51