As far as I knew about BASF [Badische Anilin- und Soda-Fabrik], its core business was cassette tapes, because that was one of the brands you'd buy in the 1970s if you could afford them.  It turns out that they are the biggest chemical company in the world with sales of €70 billion, 100,000 employees in 80 different countries.  That's big - by comparison Ireland Inc. has a GDP of about €200 billion but shared among 4.5 million 'employees'.  They were also (ir)responsible for an enormous explosion in Oppau on 21st September 1921.  With hindsight, the tale is a bit like sitting on a tree branch to be comfortable while sawing it off.

The BASF factory in Oppau had been built to manufacture ammonium sulphate, but had to switch some of its process lines when the supplies of sulphur dried up for Germany during WWI. The spare capacity was taken up using the Haber process to make ammonium nitrate.  This was a brute force physical-chemical process invented by Fritz Haber to make ammonium nitrate for the German war machine.  Not only is the nitrate salt more explosive than its sulphate cousin it is much more hygoscopic - it will suck the least trace of water from the atmosphere.  4500 tons of the two chemicals had been mixed in an enormous silo 20m high and, under the pressure of its own weight and in the presence of moisture, had solidified into a material a bit like plaster of Paris.  The management needed to clear the silo and recover the material and the only practicable way to achieve this was by man-power - men with pick-axes and barrows.  Experiments had been done after the war which suggested that the mixture of the two chemicals was stable so long as the proportion of nitrate did not exceed 40%. The line-management consulted their logs and deemed the mix to be below the threshold. Accordingly small charges of explosive were set in the mass to loosen the caked-solid heap, so that it could be more efficiently picked away.  Just like you might judiciously blast through a limestone ridge to flatten the path of a new roadway. 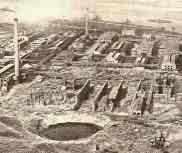 This seemingly dodgy procedure had indeed been carried out in the Oppau plant and elsewhere hundreds if not thousands of times without incident.  ANNyway, on 21st September 1921, a normal blasting charge was set and ignited in the normal way which initiated a chain reaction that vaporised the contents of the silo and killed 600 people in the surrounding area. The BOOM was heard 300 km away and post-hoc analysis suggests the blast was 1-2 kilotons in size. Ooops!  You can see the crater in the foreground of this early aerial photograph. Nobody told the workers or their trade union that this was a likely outcome, although it's impossible now to discover who said what to whom because everyone involved was dead. It has been suggested (we scientists like a rational explanation if at all possible) that the nitrate sulphate mix was not uniform and the fatal charge was placed in a pocket that was notably nitrate rich. But the official report could find no evidence about what had actually happened.  Nevertheless they recommended using only mechanical means to break up such masses in future.
Posted by BobTheScientist at 10:00