Ectopistes migratorius is the Latin name for the passenger pigeon, at one time the most numerous bird in the world, although the great taxonomist Linnaeus initially called it Columba migratoria in 1766.  But bird-watchers (we call them twitchers) are full of their own importance and this is a pretty fair example of the widespread taxonomic splitting (the opposite of lumping) that is prevalent in the naming of birds. Pigeons and doves could be plunked into a couple of genera in the same way that most mammalian taxonomists put ALL cats in to three genera Panthera for the big ones, Felis for the small ones and Acinonyx jubatus for the cheetah which is a) genetical homogeneous b) a bit out there in comparison with the other cats - it cannot retract its claws for example.  But William John Swainson moved the PP to its own genus because it hadn't got a facial stripe which seems a bit of superficial reason to me. 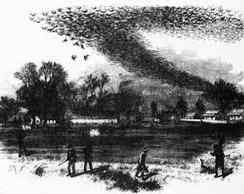 Here they come! This is a 19th century drawing of some incomming PPs, the chaps in the foreground are firing shot-guns into the crowd. About 15 years ago, there was a spike in the local population of common starlings Sturnus vulgaris which are known locally as blackstairses.  They roosted in the sitka spruce Picea sitchensis planation 1km up the lane from us in such numbers that in the morning the ground under the trees was white with bird shit.  We used to go up the hill a bit each evening to look down the valley into the plains of Wexford and could see massive flocks incommming towards us.  It was like planes lining up at a major airport: a dark cloud in the foreground followed by 3 or 4 or 5 spots of diminishing size all coming in from a heavy day's feeding on the stubbly fields.  If you haven't seen such a display you haven't lived but you can have informed youtube gratification. Our starlings that year were numbered in their thousands and they've never been as numerous in subsequent years.  I must suppose that they had eaten themselves out of hearth and home.

Thousands?  Piffle. Passenger pigeon flocks in the late 19thC were numbered in 100millions and the total population was estimated at 3 billion birds; and these are much bigger than starlings. John J. Audubon once sat on a rock putting dots on a page of his notebook for each flock of birds as they passed overhead.  He counted 163 in 21 minutes and gave up counting but noted that the birds continued to fly past in undiminished numbers for the following three days.  The numbers of this species diminished like a falling stone between 1870 and 1890 as huge quantities of birds were shot, netted and whacked with sticks to feed the growing population at the Western frontier of European expansion.  If there had been more Native North Americans left they would have made bigger inroads. There were so many dead birds unprocessed for human consumption that that farmers would drive herds of pigs to the killing fields to fatten up hogs for market.

And then abruptly it was all over.  There were no more passenger pigeons and the last one, a female called Martha, died in Cincinnati Zoo 100 hundred years ago today 1st September 1914. The slaughter on the Western Front in Europe was nothing (mere millions) compared to what had been visited upon Ectopistes migratorius over the previous generation.