I thought I was well 'ard to have walked up the coast of Portugal on my own in 1989.  It was not without its challenges - like overcoming my disappointment that the dolphins Tursiops truncatus were pacing northwards far quicker than me. The navigation was easy - if I veered too much left my feet got wet. The second leg of myTrans-iberian trek from the Portuguese to the French border was an extraordinary experience in the people I met for the first time, including myself, and a number of meals memorable for their sharing simplicity. But few people would claim that the Camino Frances was a challenge in a fell-running, ultra-marathon sort of way. The way-marks and directions, for example, are so frequent as to be intrusive as well as infantilising and even travelling against the flow away from Santiago it was almost impossible to lose the way - except in the all-important-to-pilgrims metaphorical sense.

On Thursday we had a busy afternoon neutralising the (small squidgy retreating) testicles of all our ram-lambs and ringing the tails of both sexes so that they would eventually fall off.  Then we ran most of the delivered ewes and their lambs up to a field full of fresh grass.  We have one ewe, our oldest, who is still not ready for the labour ward and we kept back our most fertile ewe and her three lambs to keep the old girl company.  Except that we didn't.  We picked out three lambs believed to be a sib-group and their mother who had a large blue 3 on her flank and let the others off.  Five minutes later one of the other lambs came back down the lane bleating for his mammy, so we had to bring everyone back to the yard and allow the lambs to choose their own mothers and vice-versa.

Sometime in the middle of these operations, a bloke and his rucksack appeared in our yard asking if there was someplace in the neighbourhood where he and his walking companion could camp for the night. All they required was a fill of their water bottles and somewhere flat and grassy. The bottom of Dau.I's field is ideal for camping: flat with the gravitational slump of top-soil and about 60m wide, sheltered by trees and only a step to the lane.  But we were just about to drive the sheep up there and, although I must have looked leery and suspicious, I was rather trying to think on my feet about how these travellers might be accommodated. There is one great camp-site on the side of our mountain, the only place flat enough for two or three tents and thistle-, gorse- and stone-free.  It's also right beside a ruined steading that will shelter a fire and cut the wind a little.  But they had already passed that and rejected it because there was no water.  I told them that water was abundant in the nascent Aughnabrisky River 250m due East of that site.  Which gave me enough time to twig that the furthest of our 3 acre fields is called The Field Over The River because it hangs 10m above a slightly more mature Aughnabrisky and is also flat along its lower edge.  I pointed them tentatively in that direction to see if it looked okay. It was and they filled their bottles and set off as happy as you can only be after a long walk when it's about to finish for the day.

I woke at 0600hrs the next morning, feeling ashamed that I'd sent them off to sit on the grass and eat beans out of a tin when they could have sat at a table and eaten stir-fry (yum) with us.  Accordingly, I made a batch of flap-jacks, and popped a few in a sugar bag to give them when they left us to continue their journey.  Only a few because they looked like the hard-chaw sort of back-packers who cut the little strings off teabags to save weight.  They were a small bit along a Trans-Ireland trek which mostly followed the Irish leg of the E8 - a European footpath that connects the Kerry coast with Byzantium. Actually they started in Greystones and were aiming for Dingle and they cleverly missed out the boring bit of the South Leinster Way where it requires walkers to share country roads with lead-foot farmers driving 4x4s.  And they missed the absurd dog-leg in Borris which avoids the desmesne of The Kavanaghs in Borris House.  The bold red wiggle gives the rough line of march: 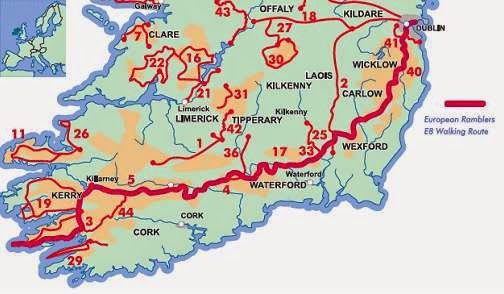 It was a bit of a change for them, and I suspect a bit of light relief because they have walked coast to coast across Scotland numerous times.  Last year they did it as part of the TGO Challenge.  The centre of Scotland is the bleakest and least populated place on the Western European Archipelago, so you need to carry everything you need including food and shelter. Here's a list of one man's trekky essentials.  I've written my inventory for Spain in August (less brutal weather than Scotland in the Spring).  We both look wussy compared to Patrick Leigh Fermor who walked from Hook of Holland to Byzantium in the 1930s with the following inventory: over-coat, spare shirts, the Oxford Book of English Verse and a volume of Horace, hob-nail boots and puttees.
Bon voyage!