I like these guys very much.  They look happy, at ease in each others' presence, with a sense of humor and they like a drink.  They have clearly been successful in something (the red coats and silly hats; the awards) and, because of the good feeling merely looking at them generates, you have to wish them well.  In the background of the bottom right high-five, is them high-fiving in predictable good humor in dinner-jackets in Stockholm in 2005: they won the Nobel prize for their work. 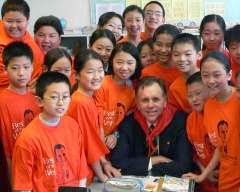 That's just bonzer because we've seen that some royal shits have achieved the same success while some very nice deserving scientists (Burnell, Best) have not.  In contrast the 2005 Medicine and Physiology Award was a Goldiloxian "just right".  You'd hope such people to be proud of their success and find the time to share it with others . . .. . . and of course they have. Here's Barry Marshall sharing himself and his ideas in China.  I don't think the kids are smiling from ear to ear to please the Party Photographer; I bet it's because Baz has just cracked a joke.  I take the liberty of calling him Baz because all Australian Barrys are "Baz" and this one is not a stuffed shirt whod' insist on Professor Marshall.  But let's go back some 30 years to see how an insight (kaCHING!) became a hypothesis, how that hypothesis was tested and how it led to an exceedingly elegant break-through in medical practice.  It also involves courageous self-experimentation in the spirit of JBS Haldane.

In 1979 Barry Marshall, then aged 28, was appointed Registrar at Royal Perth Hospital, where he met pathologist Robin Warren over their mutual interest in bacteria associated with pathological conditions in the GI tract.  Marshall tells their story in Stockholm, which I strongly recommend, not because he's funny (which he is), but because he carefully documents the development of the project.  Here's a wikipedia timeline for the discovery acknowledging the key players over at least 200 years.  Before M&W, peptic ulcers were epidemic in Western society and Tagamet/Cimetidine had recently become the drug of choice.  It worked by inhibiting acid production in the stomach - a factor known to be associated with ulcers. Marshall was outraged that Tagamet was netting GlaxoSmithKline $billion$ each year but had a near 100% relapse rate: drug off = ulcer back. A drug for share-holders if ever there was one.  His comprehensive reading of the literature suggested that Bismuth, a heavy metal chemically similar to Arsenic, had been long known a) to kill bacteria and b) to provide relief from heartburn and ulcers. Prescriptions for Bismuth had fallen off when penicillin was discovered (1928)and developed as the antimicrobial of choice. M&W found some ulcerated patients on whom to carry out some controlled experiments and showed that after a course of Bismuth (that was alchemically foul to take orally) a significant proportion of these people were cured (relapse rate 60% compared to 100% with Tagamet!).  The key insight/belief was that Bismuth worked by killing the small helical shaped bacteria that seemed to be associated with some stomach ulcers.

One of the great side-stories is that M&W had great difficulty is culturing these previously unnamed and uncharacterised bacteria which they took to calling CLOs (Campylobacter like organisms).  One weekend the Path Lab at the hospital was overwhelmed by an epidemic of MRSA so that the ulcer petri-dishes, which should have been assessed on Friday after the standard 48 hours, were left until the following Tuesday.  At that time, colonies were revealed which had not been apparent under the standard protocol because CLOs grow rather slowly in the lab - although they gallop ahead with the best of them in the stomach.  This was one of the key facts that caused the internal-medicine experts to cry "rubbish" when M&W first started to publish their results because any fule kno that nothing can grow in the stomach.  Marshall persisted in his investigations because people were dying under his care and he knew that he could save most of them if he could just tie up the loose ends of his hypothesis.  Another contemporary example of Australian certainty had a less auspicious ending.

One of the loose ends was to see if they could induce new ulcers in healthy subjects with an application of these CLOs, which were eventually called Helicobacter pylori.  They tried with piglets and came away with no conclusive results.  It should be, must be, is impossible to carry out such an experiment on humans in any institution/country that has an Ethics Committee.  So Marshall, with the support of Warren and some other colleagues (he wasn't an entirely loose cannon Dr Jekelling about the hospitals of Western Australia), chugged down 109 CFUs (that's a billion bacteria) of CLOs and waited to see what would happen.  Three days later, he felt a bit off and his Mum told him that his breath smelled off, and a couple of days after that he puked up, so he was definitely infected.  The vomit he voided was peculiarly acid free and this turned out to be interestingly diagnostic. Because H. pylori has an enzyme called urease which breaks down urea - a simple chemical which you're likely to find in lots of foodstuffs - into ammonia and carbon-dioxide. The latter is the key ingredient in regulating acidity in the blood and also here neutralises the hydrochloric acid that naturally seeps into the stomach to help promote digestion.  So urease makes the interior of the stomach less extreme and more friendly for H. pylori to grow in.  M&W mobilised this knowldege to develop a neat non-invasive test for H. pylori infection. Pop a pill of some urea made with carbon14 , wait 30 minutes and then sample the breath, if C14-rich CO2 emerges then urease - almost certainly from H. pylori -  is present. 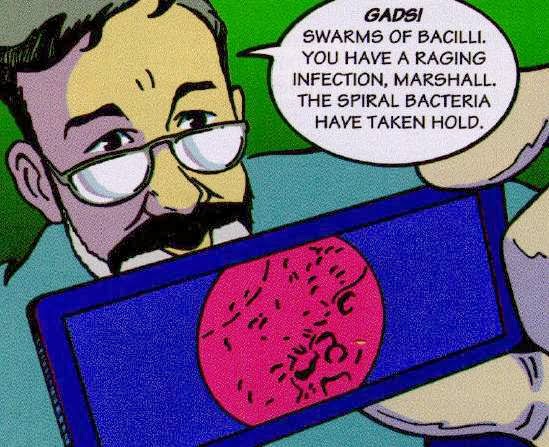 Then, for the first time since medical school, Warren the pathologist wielded an endoscope under instruction from the internist patient and they got to see a blossoming of bright red ulcers where none had been before.  As importantly, they were also able to see and culture more than 109 CLOs - so these bacteria definitely could go forth and multiply in the inhospitably acid environment of the stomach after a couple of weeks of testing, Marshall called "enough", gave himself a dose of antibiotics and returned to his normal ulcer-free state.  Those few days had been remarkably informative but they were still an anecdote where data was required.  Those data were gathered in due course; and a new, remarkably efficacious, cure (not a mere treatment of symptoms) for peptic ulcers had been discovered.  It took 10 years for the rest of the medical establishment to catch up with these pioneers, and 20 years for the significance of the discovery to bed-down with the Nobel Prize Committee. 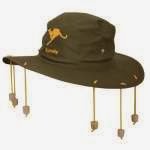 Hats, with or without corks, off!
(You can never have enough
tired national stereotypes)

Posted by BobTheScientist at 06:00