In the WEA, we hand out PhDs if you sit at the feet of your mentor for 3 years, or a little more, carry out some original research and write it up as a thesis.  When I did my PhD in the USA, we were required to attend two years of formal courses with other experts in relevant fields, then sit a Comprehensive Exam before officially starting our research work.  Of course, this is not how it happened in reality.  None of my grad school pals sat on the thumbs of their curiosity while studenting for two years and then metamorphosed into a research butterfly.  I was quite complacent when I arrived in Boston: with a marginal degree from the Best Department in the Best University in Ireland, I thought I knew it all.  Or at least knew enough.  Those two years were an eye-opener and I learned a lot about things that were just not acknowledged in the narrow and over-specialised bachelor's degree course back home.  And my Comps were Comprehensive Exams, my thesis committee of five set me a day-long examination paper on whatever they thought was important - history, ecology, genetics, evolution, mathematics, anthropology.  It was gruelling, challenging and a little inspiring.  At about tea-time, I threw down my pen, shook out the claw that my hand had become, and vowed that it was the last examination I'd ever take; and so far I've stuck to that promise.

I was thinking about this when I was reading about Grace Chisholm Young's viva after submitting her 1895 PhD thesis ("Algebraisch-gruppentheoretische Untersuchungen zur sphärischen Trigonometrie" as you ask) at Göttingen "which consisted of probing questions, in German, by several professors on conic sections, geometry, differential equations, physics, astronomy, and . . .  the area of her dissertation."  It was the first PhD thesis ever awarded to a woman in Germany.  You may ask why a woman with such a British sounding name was doing a PhD in Germany.  It was because the UK was still decades from according women in academia parity of esteem.  I was writing recently about Clara Immerwahr, who obtained her PhD a few years later in Breslau.  Immerwahr was a chemist who married another chemist and I think she became deeply unhappy in her choice: she finally shot herself out of her misery.

Contrariwise, the life of Grace Chisholm has the ring of happiness.  Her older brother was given the full monty as regards education - boarding school, then a scholarship to Christ Church Oxford (which didn't admit women until 1978!) finishing with a First in Literae Humaniores.  He went on to be editor of Encyclopædia Britannica, so he was clearly no slouch intellectually.  Grace and her sister didn't go to school but were educated at home and groomed for "good works and a good marriage".  Problem was that she was a formidable mind with a particular and outstanding grasp of mathematics.  She went to the women-only Girton College, Cambridge where she fell in with another really sharp mathematician called Isabel Maddison.  At one point, for a jape, they took the exams for Final Honours School in mathematics at the University of Oxford and out-gunned all the blokes. After Cambridge, as I say, she romped off to Göttingen for her PhD.  Shortly thereafter she returned to England to look after her aging parents and married William Henry Young who had tutored her in mathematics when she was going through Girton. They were remarkably prolific academically, knocking off more than 200 mathematical  papers and several books.  Their biographers have been exercised as to who contributed how much to this steamer-trunk full of maths and the consensus seems to be that, while she deserves some credit for several of his single author papers, the reciprocal probably isn't true.  But partitioning the credit is not really the point: they were a good team and must have struck creative sparks off each other as flint and steel. They were prolific in other ways as well, having 6 children together in short order before WWI.  Not content with excelling in mathematics, Grace also took all the courses for a medical degree and learned six languages as her family tooled round Europe in the 1920s and 30s.  She taught each of her children a musical instrument in between making formal contributions to geometry and set theory.  And she wrote a well-regarded book on sexual reproduction for children called "Bimbo and the Frogs". 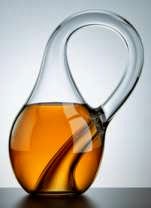 "Effortless Grace" is not quite right as a title.  She worked damned hard and put in tremendous hours with her children, her mathematics, and her many other commitments.  But I get the feeling that, all along the way she was supported and encouraged.  By her parents initially and then by such key people as W.H. Young who taught and much later married her; Arthur Cayley who sent her to Felix Klein in Göttingen. Klein who took her on and supervised her PhD thesis, and was famous for the Klein Bottle (shown right full of beer) a sort of n-dimensional Möbius strip. Even the enormous Georg Cantor had this to say of one of her books "Es ist eine Freude für mich, um zu sehen, was mit Fleiß, Geschick und Erfolg, den Sie gearbeitet haben, und ich wünsche Ihnen in Ihrer weiteren Forschungen in diesem Bereich auch die besten Ergebnisse, die mit einer solchen Tiefe und Schärfe des Geistes auf beiden Teilen Sie Ihre Sie können nicht umhin zu erreichen. (It is a pleasure for me to see with what diligence, skill and success you have worked and I wish you, in your further researches in this field as well, the finest results, which, with such depth and acuteness of mind on both your parts, you cannot fail to attain).

When the phony war of 1939-1940 hotted up with the invasion of France, Grace decided to repatriate two of her grand-children from Switzerland to England.  She was almost too late, having to bundle the two kids and herself onto the last plane from Paris to London.  She never saw her husband again, because both of them died before the war ended.  From reading some of her letters, she must have been good fun, you'd like to have had lunch with her, and it's her birthday (1868) today!

Bonnets OFF (women in science series).
Posted by BobTheScientist at 07:07