Μάχη τοῦ Μαραθῶνος, the Battle of Marathon was fought on 12th September 490BCE, or possibly the month before depending on which ancient Greek city's lunar-solar calendar you can make sense of and believe.  2500 years ago, the Persian Empire was expanding inexorably Westwards and had enveloped and consumed the Greek cities on the Eastern side of the Aegean.  The Athenians sent an army out to engage the Persian Army which had just landed in Attica near the town of Marathon. Strategically an action was called for that would hold the Persians at the beach-head until the Spartans stopped combing their hair and celebrating a local religious festival, and hurried North to boost numbers. 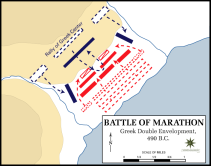 But after a five day stand-off, the Athenians seized an opportunity, whose exact nature is a little murky from the dawn of written history, and caught the much larger Persian army in a tactic called double-envelopment.  The Persians broke and fled back towards their ships and the Athenians butchered them along the away. The dead-count at the end of the day was 6400 Persians : 192 Athenians + 11 Plataeans.  So 'twas a famous victory.

If Miltiades the Athenian general hadn't seized the moment, everything would have been different. Two days ago, I said something similar about Dennis Ritchie's impact on today's Wired World, but Marathon's impact was huge, a different result and everything would have been different.  The bloodied nose discouraged the Persians from pushing onwards with their Westward tramp for another decade and boosted the confidence of the nascent democracy in Athens enough to allow them create the beginnings of pretty much everything that we in The West call civilisation.  Starting with Sophocles Σοφοκλῆς who was 7 when the battle was fought, Euripides Εὐριπίδης who would not be born for another ten years and especially Aeschylus Αἰσχύλος who was there, doing his democratic pro patria duty at the age of 35.  So proud was he of this achievement, that his epitaph omitted all mention of his stunning, timeless plays