The Battle of Borodino - Бородинское сражение - is billed as the bloodiest ever fought by La Grande Armee of Napoleon.  The Russians had been retreating eastwards since Napoleon had crossed the border at the R Niemen in the middle of June 1812, at the head of 286,000 soldiers - a city on the march.  This retreat was strategically the correct thing to do, but politically impossible and at the end of August the Russians changed generals and appointed Prince Mikhail Kutuzov as CnC.  The Russian army fought the French to a standstill on 7th Sept 1812 just 125km from Moscow and continued their retreat as a functional unit

Scientists often measure things and often they see if two variables are correlated.  So, for example, very early on in my career at The Institute, I put forward the hypothesis that the abundance of the 25 elements that have a function in the human body might match their abundance in the lithosphere.  Science has the whole world as its bailiwick, whereas history has a far more constrained range of information sources - mostly written for events of 200 years ago.  So you'd think that, with everyone working through exactly the same material there would be some agreement about the data.  Not a bit of it!  Wikipedia summarises Mikaberidze's work reporting wildly different estimates of the number of soldiers fighting on the two sides.  25 historians have gone to the library and had a go at this task. 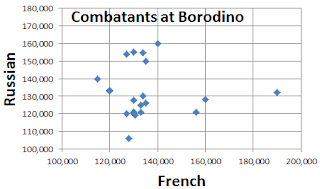 A perfect example of zero correlation (r = 0.008)!  You'd think that if Historian X was extravagant with his estimates s/he'd big up both sides to make it seem more majestic/horrific.  And similarly Historian C for conservative would be careful not to exaggerate - either side. They can't even agree on the ratio: estimates here range from there being 20% more Russians to 40% more French.  Well really!  Is it any wonder that scientists look at the output of The Arts Block and think it is woolly, irreproducible and wholly subjective?  Part of the problem is that this battle acquired rather active legs for Soviet propaganda; and no French historian could be expected to approach the task without some sort of baggage.

There is a little more agreement about the frightening level of casualties.  The French lost 35,000 (about a sixth of them dead on the day, the rest wounded; almost all of whom would starve or bleed to death or be murdered by looters over the next few days - the French were at the very end of their tether for supplies).  The Russians found that they had lost 45,000 effectives - being a Home Match the survival rate among their wounded would be marginally better than for the poor French boys dying so far from home for La Gloire.  Historian Gwynne Dyer, in his book War compared the carnage at Borodino to "a fully-loaded 747 crashing, with no survivors, every 5 minutes for eight hours."  A metaphor which puts 9/11 into perspective.
The Math: Boeing 747 capacity 525 * 60/5 * 8 = 50,000; which is counting almost all the wounded as 'no survivors'.

Two extraordinary things came out of the debacle:
Little enough positive in the balance against smashing 80,000 fit young men to bloody rags, isn't it?