Years ago, we lived in the North of England and, during the Autumn midterm one year, I announced that me and The Boy were going to Cape Wrath - the very-top-left-most corner of Scotland. We set off North and, as dusk fell in the middle of Scotland, we needed to find a) food and b) a place to camp.  The first was easy because we were only 34, 30, 25, 17 miles from Braemar: famous in song and story, seat of the Highland Games, where Elizabeth Windsor Sr. was known to down a few G&Ts of an evening.  So we fell into a drooling discussion of what we'd eat when we arrived in town.  I was for chicken curry and he was for pizza, but I was prepared to concede my druthers if there was pepperoni.  So imagine our disappointment when tally of Braemar's restaurants had an N = 0.  There was a tea-shoppe (closed) two pubs and a couple of grand hotels.  No pizza.  So we tightened our belts (we weren't talking much to each other, certainly not about food, by then) and drove on-and-on-and-on to Grantown-on-Spey where The Boy had his first deep-fried pizza and I had scotch-pie and chips.  We felt a bit cheated by Braemar's reputation.

Years later, but still years ago, I was the Irish representative of a European consortium and we had our AGM in Vienna.  Our host and shepherd had booked the 40 of us into a cheap and cheerful hotel near where he lived and scheduled the business meeting to start at 0900hrs in the University on the other side of the city centre.  At about 0830, he strolled into the lobby and said that we could catch the next tram going north.  He was completely confident that a rush-hour journey involving two trams and a bus could be completed in time - and it was so.

It just felt so civilized, if a little alien for one who was used to Dublin buses arriving in flocks at very irregular intervals, and no trams at all - this was before the wonderful Luas arrived.  Vienna also felt very central because on the way out to airport, we passed under the sign shown to the left.  I was just thrilled to be told by the cabbie that Bratislava is only 60km from Vienna.  Indeed Bratislava should be your airport of choice if you're going to Vienna with Ryanair because it's much closer than the three Austrian airports (Klagenfurt 236km, Linz 152km , Salzburg 253km) served by Ireland's Own Carrier. 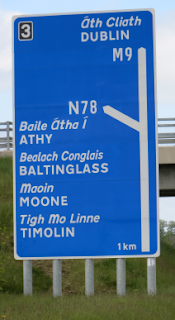 Mais revenons-nous a nos moutons.  After all the travel, we should try to bring this back towards the title.  When we returned to Ireland in 1990, after a dozen years in foreign, the country was staggering out of the end of the 1980s recession and it was still poor, rural and whatever is the opposite of multinational.  There were, as I said above, no trams; there were no motorways and certainly no nighttime buses to the airport.  Since then, we've acquired all three and so it's much easier to get around.  Now imagine that you're new to the country and heading North on the M9 from Waterford. You're all hank-marvin and the kids are wrangling in the back, so you'd be delighted to see Exit 3 leading to Baltinglass, Athy, Timolin and Moone.  Moone or Timolin (the nearest to the junction) would surely have a choice of places to feed the children.  But if our travelers thought that then they would be disappointingly Braemarred.  Because the National Roads Authority sees fit to give villages parity of esteem with the cities and large towns that appear on motorway signs in continental Europe. Let's look at the statistics using population as a surrogate marker for markets, restaurants, t'ilets, Irish dancing studios.  Because I really deprecate spurious accuracy we'll give the figures to the nearest 10,000 people:
European distances from WolframAlpha; European populations from Wikipedia and the Irish pops from Table 12 of the 2011 Census summary reports at the Central Statistics Office: "Alphabetical list of towns with their populations".  This says that Baltinglass has 2,000 inhabitants (rounds to zero).  Neither Timolin nor Moone feature in the list, so they must be smaller than Arthurstown, WX N=135; Ballyedmond, WX, N=116; or Cromane, KY, N=115.

Now here's an idea that will ignite The Gathering this year, Tourism Ireland could run a competition for identifying the least significant Irish hamlet that features in letters 50cm tall on motorway signs.  First prize: a weekend in Inch, Co Wexford (one of the candidates).  Second prize: a full week.
Posted by BobTheScientist at 22:16