A bit weak in the head

The Boy takes The Economist. A few months ago, he was clearing the back-catalog of the print magazine and ripped out a big wodge of articles on science, books, engineering, politics, the Arts . . . and sent the parcel on to me. He correctly surmised that some of this material might be Blob-fodder. 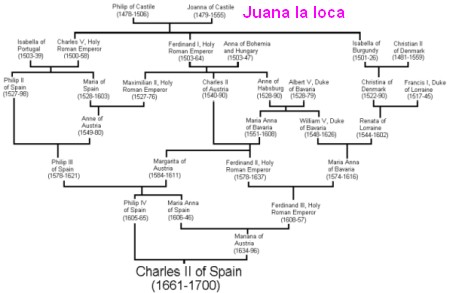 One piece tinkled a bell for me because it started with a familiar diagram [above] of 200 years of incest in the royal families of Europe: there are a lot of uncles bonking their nieces to keep wealth in the family. That family tree was familiar because, in the 1970s, I'd spent a tuthree weeks of my time as an undergraduate calculating the inbreeding coefficient of these same people . . . and finding that this was inversely correlated with their fertility. I really should have devoted more time to the actual curriculum because I'd surely have gotten tenure at Harvard Haverfordwest; rather than subjecting my pay-check to 40 years of short-term contracts.

The Economist article is an executive summary of an academic paper History’s Masters: The Effect of European Monarchs on State Performance by Sebastian Ottinger and Nico Voigtländer from UCLA. They ignored extended my earlier analysis and considered the geopolitical effects of inbreeding and intellectual compromise. Where to get data? They have abstracted data from such sources as Frederick A. Woods (1906). Mental and Moral Heredity in Royalty: A Statistical Study in History and Psychology. Woods doesn't merit an entry in Wikipedia but in his day, he was a leader in application of science to history. His book wasn't peer reviewed but some of his conclusions were dissed by those who came after when his patriarchal certainties about the world before 1914 were put under the scrutiny of a different set of values.

The paper makes a bit of a guy about poor Carlos II of Spain El Heckizado [L] who was not the most robust twig on the Habsburg family tree: developmental delay, intellectual disability, dysarthria, skeletal deformity, recurrent infections, epilepsy and infertility possibly caused by aspartylglucosaminuria. a lysosomal storage disorder. Poor bugger, he'd had cut a better figure if modern medical interventions had been available - his family would have been able to afford the astronomical cost. In contrast the fact that the whole dynasty was founded by Joan the Mad Juana la Loca is reduced to a footnote by Ottinger and Voigtländer. Which is possibly fair enough: it is not clear to present day sensibilities that Juana was "mad" so much as depressed by the weight of expectation on her shoulders. 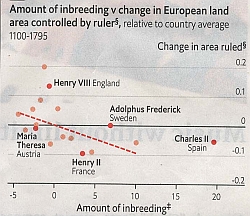 The conclusion is that inbreeding adversely affected a) the subjective assessment of ruler's ability and b) the size of that ruler's empire.  a) is derived from opinions by long dead dudes like Frederick A Woods about even longer dead dudes like Carlos V of the lithp. So there's a good bit of slack in there. For b) here at least the dependent and independent variables are reasonably quantifiable although the overall pattern is noisy. Note [R clipped from the Economist] that Henri II lost more land than Carlos II but was significantly more out-bred than his opposite number south of the Pyrenees.  I've read [well, I've scanned] the original paper and it's not obvious whence this graph has been conjured. But don't listen to me, what do I know about statistical history. If you're interested, here's a 90 min prez by Voigtländer on his paper for the Asia Global Institute, a multidisciplinary think tank co-established by The University of Hong Kong and the Fung Global Institute. Marx knows what the communists will make of all these degenerate royals.