I was quite snitty about Tim Egan's reportage on the Via Francigena from Canterbury to Rome. My main gripe was that he embarked on his journey specifically to monetize the experience with another of his well-crafted books: it was performative. My experience of pilgrimage is that it can be a massive fail if you start with expectations - those expectations tend to blinker the pilgrim to the new . . . including the numinous. I remember St James's Day 2004: lining up with The Boy in the broad stairwell to get our Compostella in Santiago. Slumped on a step another pilgrim wailed "is that all?" to his mates: all that trudge, all those blisters and still untransfigured - robbed. 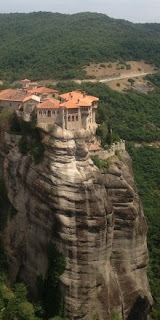 The Lawd The Borrowbox Algorithm must be calling me back to The Way because, no sooner had I ticked off Tim Egan, but I was reading The Crossway [2018] by Guy Stagg. He walked the Via Francigena in 2013 starting in midwinter and crossing the Col du Grand St-Bernard . . . in a whiteout. He should have died, but he figured that in the old days many pilgrims made it, so it was possible. Being from The Arts Block, he didn't care to get out the back of an envelope to determine probable? He arrived in Rome, did the sights but had not intended to stop. Rather, he set out across Italy on the Appian Way to Bari, picked up the Via Egnatia in Durrës, Albania and walked to Constantinople. Loving but leaving a green-eyed Albania girl called Esme.

He had a tent and a sleeping bag but generally he was handed off from one refuge to another, sharing dinner with monks and sleeping in austere bunks. He stayed briefly in Meteora, Greece [R] as well as Mount Athos. The week he arrived in Istanbul, the riots against Erdoğan kicked off and the journalist in him hung around to get tear-gassed . . . but not pepper-sprayed or, like, shot. But The City, like Rome, was only a way-station to The Promised Land.

Turkish hospitality took him further along the way to more flat-bread, olives and cheese in Cyprus, Lebanon and Israel. He couldn't go through Syria because Sarin. He arrived in Jerusalem and did the round of sites in the various quarters of the city. He had accepted that he too was going to be untransfigured at the Dome of The Rock but healing and redemption had been dumped from his agenda a good many miles back along the journey. Like a real pilgrim, who goes beyond Santiago to Fisterra, the End of the World, Stagg shoulders his pack and heads East into The Desert. That's not enough either, but it doesn't matter because he's been there under his own steam. If he doesn't believe, he can at least roll back through the (gorgeous) photographic evidence of his journey. Because he is not the same, troubled, youth as he was before he left London.

Pilgrimage has much to recommend it for unbelievers.

The darkness drops again; but now I know
That twenty centuries of stony sleep
Were vexed to nightmare by a rocking cradle,
And what rough beast, its hour come round at last,
Slouches towards Bethlehem to be born?
Posted by BobTheScientist at 07:38