Something rotten in the state of Dance-mark 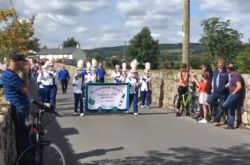 Our girls Dau.I and Dau.II grew up in the rural midlands and never went to school. Their education was very much on the unschooling end of the spectrum and they showed no interest in team sports - presumably taking a cue from the parents. But they spent a lot of time in the car [carbon footprint hadn't been discovered in the 00s] listening to audio-books, singing and wrangling [it all started when she hit me back] . . . while en route to events. Ballet, tin-whistle, flute, speech&drama, painting . . . one year they joined a local marching band, had rehearsals one evening a week, with parades on the weekend. The enterprise was run as a business, run by a family embedded in the community transitioning into its second generation of leadership. It was cliquey and incestuous; week after week our girls got to carry the effin' banner while the other kids played instruments. After a season of paying their dues and learning neither fife nor drum, they jacked it in.

In their other musical endeavours there was  a lot of pressure to sit exams. Music teachers are trying to make a living and there is high turnover in the clientele: mostly sub-teens before they discover sex, booze and rock&roll. Teachers need those exam results to establish their own street cred, any benefit for the examinees is incidental. 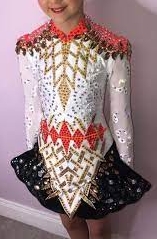 At least they never opted for Irish Dance where there is an additional burden of the fake hair, the fake tan, the bling of sequins on electric-coloured synthetic costumes, the bleeding toe-nails, the money it all costs. Modern dance-frocks cost as much as a wedding dress: comfortably into the $X,xxx range. A couple of days ago, an Irish Dance cheating scandal blew up. From the headlines it seemed equivalent to the competitive fishing fixing [covered in puns by MetaFilter] or chess cheating [Guardian] and I was all set to post it to MetaFilter as another example of how money and power corrupt every pastime they envelop: even had a clever title which I have recycled above. It's easy to play these things for larfs when a) nobody died and b) we can other the protagonists as bib-overalled rubes [competitive catfish fishers] or cerebral wonks [grandmaster chessters]

Someone else posted a MeFi link about the scandal so I didn't have to. I dithered because, as I read around the story, suddenly it wasn't fun, let alone funny, anymore. A series leaked txts mentioned "exchanging sexual favours for higher scores" which sounded like teachers whoring out their pupils and radio chat-show host Joe Duffy had a segment where the father a dead dancer called in to say that the community and culture of competitive Irish dancing hadn't helped his daughter's mental health. I learned later that the sexual favours were more about teacher taking one [up the oompah] for the team than pimping which brings it down to ordinary consenting adults levels of eeeuw.

Don't get me started on Michael Flatley's Riverdance fascist extravaganzas. Worryingly Lord of the Dance is performing [tix €50-€100] in Meistersingerhalle Nürnberg on 19th October 2022. Just 88 years and 880m from where Leni Riefenstahl shot Triumph des Willens.