Was I on about decluttering recently? I was: in particular the, originally Swedish, concept of death cleaning aka döstädening. I take from this that getting rid of sentimental-attachment shite is

If it takes a ceramic rissole [L] for you to remember that amazing meal you had with your long dead father - the time he told a joke that was most improper for children - then perhaps of don't need the rissole. Just imagine your children going through the house after the funeral "Guess what I've found? A ceramic rissole! I can't imagine why someone would make such an object; but only Pop would be dopey enough to buy one - ah bless".  It was a bit like being present at me own wake when Dau.II came up from Cork for the long weekend and offered to help process some of the stuff in the shed. Shed-stuff consists of material possessions that are reasonably immune to cold-and-damp but not in regular use. The döstädening gauleiters would define it differently.

Shed-stuff (n.) stuff that should be shed.
Brutal, but often true dat! Bank-holiday Sunday was a Perfect Day for mowing the lawn - slight breeze; good sun; bone dry - but also for turning a shedful out onto the [recently mowed] grass and seeing what we had <da da daaah> behind the crate brim-full of jam-jars-for-next-years-marmalade. Down a couple of archaeological layers, Dau.II found three flat-screen computer monitors which haven't been warm for at least three years. The sight of computer kit for the dump sent me up the attic of the shed for a 30lt box of  "misc. comp.peripherals". If you think that stuff in the distant shed has rather low status, imagine how stuff in the dark attic of the distant shed feels. Behind the misc.comp.peripherals box was a disintegrating plastic bag marked "olde lappe-tops", so I brought that down as well. 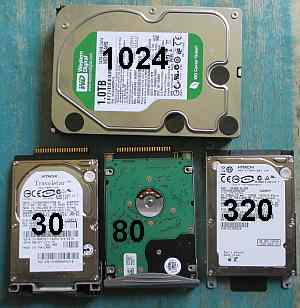 We each acquired a Dell lap-top when the first SFI-funded Molecular Evolution Lab was set up in 2001. The boss had a few million €uros to spend and that seemed a justifiable way of keeping the troops fully productive even when away from their desks. Well that laptop, and two of its descendant, is now for recycling and gold-abstraction. I'm not so naive as to discard the whole instrument when it still has information about the correct way to parse the human genome - imagine <WhatsApp alert> if The Feds or The Reds got hold of that?? So I filleted out the hard-drives: shown above with their storage capacity in Gb. The storage capacity and the speed went up in leaps and bounds but the price was more of less the same - that is the Law of Computing Costs. 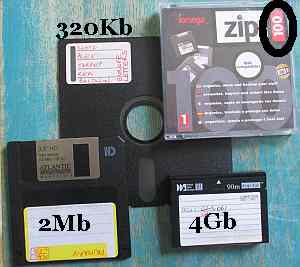 The box of misc. comp.peripherals was mostly a tangle of wires each one with a connector at one end and a different connector or a gadget at the other. Everything nowadays is USB but in the past there was a wild variety of incompatible plugs & plug-holes. All for the dump! Even the hook-on-your-monitor ALDIDL web-cam that lasted about 3 weeks. But underneath the wires were layers of magnetic data-storage devices. A collection of 5¼ inch floppies; lots more of 3½ inch 'stiffies' - that's what my German pals called them in the 90s anyway. At some stage I had bought floppy storage-boxes with plastic section dividers to keep the data in finger-tip librarian order. There were even a dozen 100MB zip-drives - remember them from 20 years ago? They were the backup's answer to Microsoft bloatware because they could store about 50x more bytes on an object that was only twice the size of a 3½ inch floppy. But for the big stuff - the DNA database from 1993; all the files of my 300 users when I was SYS$OP for The Irish National Centre for BioInformatics INCBI at the end of the last century - I have a small collection of 90m DAT tapes that were supposed to have a capacity 40x more than a Zip-drive.

I spent a few minutes sorting out the GDPR-compliant discs for dump - ancient operating systems; start-up discs; obsolete printer-drivers - and a much longer time thinking about how I could dispose of all the personal or potentially personal stuff  (I don't have anything that can read a zip-drive to find out; but I am confident that all the Polish dump scavengers do). It is salutary to reflect on man's vanity that I should have been so careful to make copies of this valuable material and it is now beyond my wit or available technology to read it. We can make a stab at reading Linear-B shopping lists from the 3000 year old but electronic media from 30 years ago is essentially beyond recovery.