A Slip of the Pratchett 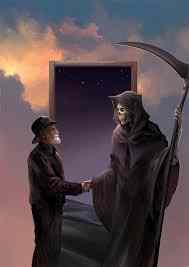 Terry Pratchett died four-and-a-bit years ago which will start to put value on Dau.I's double signed [+Neil Gaiman] copy of Good Omens. I wrote about her Groupie assault on the great man as part of my obit in 2015. I helped Dau.I move house a while ago - loads of books to carry up and down stairs. There was one small box of relucant discards - mostly dupes and I snagged A Slip of the Keyboard ASotK(2014), a book of journalism and advocacy by Terry Pratchett. There's something slightly off when a best-selling author's agent and publisher and hangers on conspire >!kaCHING!< to recycle exi$ting material to $queeze the la$t dribble of ca$h from the loyal fanba$e. But A Blink of the Screen (2012) Pratchett's earlier compendium of short fiction had made them so much money that it was hard to resist.

Nevertheless, I ploughed through ASotK in a couple days of because it was well written and on the sort of topics which are interesting to both Pratchett and me - skepticism; evolution; the craft of writing; agnosticism; death.

You want fantasy? Here's one . . . there's theis epcies that lives on a planet afew miles above molten rock and a few miles below a vacuum that would suck the life oit of them. They live in a bried period between ice ages, when giant asteroids have temporarily stopped smacking into the surface, As far as they can tell, there's nowhere else in the universe where they could stay alive for ten seconds. True dat ! and sensible, educated people deride Pratchett's Discworld as inherently impossible to believe.

Pratchett was diagnosed with posterior cortical atrophy PCA a peculiar form of early-onset dementia. It is not the same as Alzheimer's - indeed evidence is accumulating that Alzheimer's is rather a constellation of neurodegenerative disasters leading to progressive cognitive disfunction which is explained at post-mortem by obvious changes to the structure of the brain. With PCA, the memory loss is a late addition to the litany of symptoms. If starts off with failures in vision, navigation, driving, reading, typing and dressing: knocking over wine-glasses, smacking off the wing-mirrors, making a dog's dinner of putting on a shirt & tie. One of the standard Alz-tests is to ask the perp to name as many animals as possible in a set time. This is check-box science because the consultant can tally up the named animals (aardvark, aardvark & aardvark count as one Orychteropus afer) and compare that to the number cited 6 months ago and determine if things are staying the same or getting worse . . . they never get better. When they tested Pratchett he rattled off a record number of obscure and quirky beasts - some probably from the Discworld - but was still nevertheless unable to reliably put his underpants on.  That's why consultants earn the big bucks - they specialise is just part of the ills and deficits which all doctors encounter; and so get to see lots of similar cases and develop a good nose for the differences and similarities among different patients.

From his dull red fury at the crappiness of getting such a diagnosis, it was a short step for Pratchett to become a noisy advocate for change on the UK laws to allow people like him the right to die in a time and place of his choosing, if necessary with kind, caring and competent people to help him over the line. It seemd absurd that anyone, even a rich person like himself, should have to schlep off to an alien place in Switzerland to be drugged off efficiently and reliably into The Big Sleep. Why could he not have his awf'y big adventure sitting in his favorite chair in the gadren with a glass of brandy and Thomas Tallis' Spem in Alium on the speakers? Because The Man has decided that adults have to be protected from their own desires. Not when those desires involved alcohol ot shopping, mind you. I've put out my case for the Right To Off Self.  I know you won't follow the link so I'll just leave hanging there the fact that Dignitas will bill you €10,000 for their offing service. That's a lot more than I intend to spend on the funeral.
Posted by BobTheScientist at 07:37