We know where you live 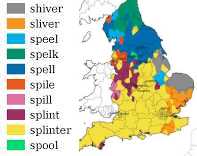 I've been pushing for diversity as long as I can remember.  Bring on those Syrian obstetricians! They are not doing much in a refugee camp in Lebanon (expect a little light pro bono delivery I guess) whereas they'd give a lift to the stultifying sameness of, say, Tullamore or Athlone; where there were no pierogi <shock> until the Polish shops started appearing 15 years ago. It's especially important as new evidence from Cambridge shows that our cultural diversity is being eroded by the decade as youngsters learn what to call things and how to pronounce them from the TV rather than from their grand-parents. The map [R] shows what English people called "a little piece of wood stuck under the skin" in 1950. But the same effect is  As a Man of Kent [prev] I've always called those things splinters but there was a satisfying range of synonyms across the country. Everyone now uses 'splinter' except the Geordie Resistance in the North-East where they hold out for 'spelk'. Thisall is similar to the dialect maps of the USA from Joshua Katz [prev].  I've written about Scots / Lallans /Doric as the main remaining variant of 'English' in Great Britain; and touched on the [forcible] demise of Langue D'oc in France. You can bet that such Midland dialect words as snobby wedder and moby will either die out or become common all over the country.  Same for Corkish.

The Cambridge app can, apparently, place the best 25th percentile to within 20 miles of their place of birth; nearly halving the radius of accuracy over the previous methods. And yes, they really do use miles rather than kilometers: the Arts Block really is unwilling to move out of the 1950s. This know-where-you-live may not be a good thing: the Scheveningen Test has been used to finger and kill people of the older generation.  Some desultory commentary on the Cambridge App on Metafilter.

As further evidence that there is less linguistic diversity now than in the past, you may care to wing off to the Smithsonian to check out a handful of languages that are no longer spoken in the Connecticut Valley.
Posted by BobTheScientist at 06:41