Alaska - the hot place to be

Be very afraid? I had Alaska in the Olds a week ago while I was going on about a truly massive volcanic eruption that occurred just over 100 years ago.  That was HOT, although there were very few people about to witness it or bake potatoes in the lava. Alaska is in the News now and it's about unseasonably high temperatures again. 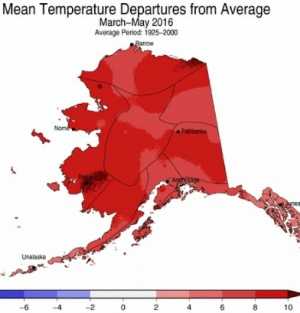 This is a relative heat map, mind; the temperature this Spring has barely risen above freezing but the 75 year average has been 5-10oF lower than what has been experienced in 2016. All the cities of the state - Juneau, Fairbanks, Anchorage - report the warmest Spring temperatures since records began. This echoes the warm spike in Greenland that I reported in April. Refer also to the anomalous cold spot in the Atlantic last year. They are clearly straws in the same wind. You might think that the Greenland angle is more serious because if the ice-dome melts the mean sea-level will rise 6m but a permafrost melt in Alaska is going to release a methane vortex that will accelerate global warming far more effectively than an equivalent amount of carbon-dioxide produced when you [it's all your fault] pootle off to the shop in your car to buy the newspaper and some croissants.

One little considered aspects of changes in the climate is that it upsets some of the delicately woven webs of connection in ecosystems. Plants may use temperature as the cue to set flowers but their insect pollinators may rely on day-length to trigger hatching.  In normal years these two things go together and everyone wins.  If the flowers come too early, and there are no insects to pollinate them then the next year that species of plant is absent. Filling the vacant ecological niche is subject to random processes which may have knock-on knock-on knock-on consequences that are as easy to predict as the outcome of a chess-game between two grand-masters . . . that's a metaphor: out there we have thousands of players all with set ways of doing things, some less flexible than others.
Posted by BobTheScientist at 06:57