I've had a helluva a lot to say about Richard Feynman, Nobel Prizewinner, percussionist and general clever-clogs. This last aspect of his character makes a lot of people think they have had too much Feynman already.  But Dau.II sent me a couple of interesting books, neither of them recent, for my birthday. I sat down and read Some Time with Feynman by Leonard Mlodinow the very next day. You can pwn your own copy for $0.01/£0.01 plus p&p from Amazon. Leonard Mlodinow, that's a distinctive name, I've seen that before? Indeed yes: right here on the Blob in my rave review of his The Drunkard's Walk: How Randomness Rules Our Lives [you have to cough up £0.68 min for that].

If you read the Feynman book you'll be subjected to FFTMI [far far too much info] about Dr Mlodinow's testicles: they are apparently [no photos included, sorry) weirdly shaped.  Indeed they have sufficient bumps and nodules that his GP was sure he had testicular cancer . . . but two testicologists called in for a consult concluded that as the testes were symmetrically blobby his condition must be congenital and probably hereditary rather than cancerous and possibly fatal. That brush with the big C, serves as a bit of a wake-up call for young Leonard: he really has to decide whether he should carry on an academic career in particle physics just because he is really good at it and has had a huge early success: solving a conundrum in theoretical physics by invoking at infinite number of dimensions.  The publication of that paper got him a, rare as hen's teeth, tenure-track appointment at CalTech immediately after his PhD at Berkeley. 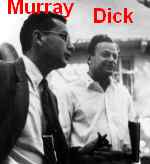 As it panned out, he got an office on the same corridor as Richard Feynman  [L, R]and polymathically erudite know-it-all (and Nobel Prize winner) Murray Gell-Mann [L, L] with the expectation that his early triumph would develop into prizes and fame on CalTech's watch. No pressure Len! Poor chap, he suffered a huge creative block, which probably wouldn't have happened if his first job had been at a less prestigious institution. As a brilliant fellow, he allowed his creativity to spill out into starting to write a screenplay: it's in the air - Hollywood is only 25km West of Pasadena. ANNyway, while he was struggling with the writing and agonising about coming up empty for physics, one of his old professors came to visit. They go out to lunch at the staff dining hall and Prof asks ex-student what he's working on just now (as y' do). Mlodinow mentions the screenplay and the professor has a shit-fit. For him - narrow, established, cerebral, tenured, snobbish and judgemental - a screenplay [think Lady Bracknell " a haaandbag?"] was an utter betrayal of the work, the talent, the education, of his former student. Pathetic really: as if there was nothing in the world that mattered except the arcane and ultimately unprovable mind-games of theoretical physics.

Not me. I worked at an English University just after I landed the PhD for six years. Each of those years we graduated a cohort of 12-15 honours students.  In all those years we dribbled out the 1st Class Honours: one or two a year.  But there was only one student who really deserved such a degree. Educated over the borrrder in Scotland, where they take such things seriously, this woman was super-smart and widely read.  She quoted a Greek tag, entirely appropriately, in one paper of her Finals!  At the end of year party, I asked one of my colleagues if anyone knew what what plans Stargirl had for the future. The answer was "[Harrrumph] running a climbing and hiking shop in the Lake District". Me, I thought that was delightful: you'd better use your knees in your 20s because they'll be off-their-game in your 40s, and totally buggered in your 60s [am there, know that]. Same goes for your mind, of course, but "mens sana in corpore sano" [can't do Greek - too thick] you need both mind and body preferably propping each other up in equilibrium

Mlodinow becomes a bit of a Feynman groupie - hence the title of his book. Even, coyly, asking the great man if he can record their conversations together. As well as physics and chit-chat they compare the nature of creativity in the Arts and Sciences.  Feynman puts his finger on the difference by saying that a scientist's brilliant idea is - has to be - approved by god: in other words, the hypothesis / theory has to be validated against the reality of Nature in an experiment.  In the Arts, otoh, anything goes: whatever comes into your creative noddle can be put into the public domain and the only arbiter of its value is current taste,  Not my taste or your taste but the taste of critics, insiders and other artists. In both fields, originality is key: you get no credit for coming up with the same stuff as someone else and little credit for being derivative or imitative or in-the-style-of. Creativity thus spirals outwards away from current normality into realms unknown. With science it has to work; with the Arts there is nothing to hold you back . . . from the brink of Humpty-Dumpty "When I use a word, it means just what I choose it to mean—neither more nor less.".  If there is no reality check, bollix is just round the corner.  And the bollix, in contrast to Dr Mlodinow's, are too often neither normal nor interesting.
Posted by BobTheScientist at 06:55