My oldest friend with a Y chromosome has done well for himself as a transplant surgeon in Canada. We sat in the same region of a vast lecture hall to learn Chemistry in our first year in college. He qualified a real doctor and took his family off to a godforsaken mining town on the Arctic circle to make a living and a life. After serving his time in the outback, he got a job as a surgeon in Halifax and rose through the ranks as his experience grew and he didn't kill too many of his patients. One day in theatre, he met a young registrar who had returned from a tour of duty with the Canadian Army in Afgho. My pal Mac reflected that, if a much younger chap with a family of small children could serve his country in this direct way, then so could Mac. So he took the Queen's shilling, did basic training, was given some combats and a cap and qualified as an army surgeon. I don't know if they cut him some slack in boot-camp because he was older, wheezier and more valuable than the other squaddies.  I think his tours in Asia were a headache in the rostering for the administrative staff at his hospital back home; but they were unable to do much more than splutter about it. Being conspicuously patriotic and pro bono gives you a rather good leg to stand on when facing down The Suits. 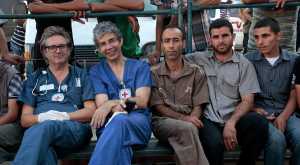 I was reminded of this when David Nott [R: second from left; between operations in Gaza] surfaced recently on BBC's Desert Island Discs. Nott is another surgeon, Welsh, who has a touch of wanderlust about him. He is holding down several jobs in hospitals in London but regularly goes off the war with Médecins Sans Frontières MSF or the Red Cross.  That's real war, with incoming artillery and theatres with no windows. In January, he was given the Robert Burns Humanitarian Award. He maintains that doctors are particular targets in these local wars because loss of a doctor can cause a lot more knock-on death among the opposition. There must be a peculiar sense of resilience in such people.  Surgeons are known for being decision makers - you can't do nothing when an artery ruptures under you fingers - and they need the people around them to do their bidding instanter.  So I think they get a reputation for being hard-chaws and a bit barky.  It's clear from the DID interview that Mr Nott [never refer to a surgeon as Dr!] is a softie with a big heart and more compassion than he can easily use.  There were a couple of times when he was unable to continue his story because the memory of the grief and waste overcame him. And his choice of music is interesting. You could do worse than listen to his story.

You might even be inspired to contribute to his humanitarian foundation.
Posted by BobTheScientist at 05:54