Not shrimps, the legionnaires

Today is the 150th anniversary of the "Battle" of Camaron in Mexico, a long day for a small detachment of 65 members of the French Legion etranger who held off an army of at least 2000 Mexicans during the French Intervention in Mexico.  Captain Jean Danjou, the French commander, died in the process along with 2/3rds of his men.  Only two unwounded soldiers remained at the end of the day and they refused to surrender unless they could keep their arms and escort the body of their Capitain off the battle-field. It was an iconic moment in the history of the Foreign Legion and is celebrated by them each year on this day.  Two peculiarities attend the ceremonies.  The officers make coffee for the ranks because in 1863 the soldiers were interrupted by the Mexicans just as they were about to have theirs and spent the whole day without water, let alone coffee.  The Hand of Danjou is also reverenced.  Captain Danjou, a career soldier and graduate of St Cyr had blown off his left hand in an accident in 1853 and sported a wooden prosthesis painted to look like a gloved hand.  This was discovered after the battle and found its way back to the Legion's head office in France.

The French Intervention was an abortive example of Imperialist politics which seems appropriate to celebrate the day before MayDay.  A group of Mexican monarchists came to Europe looking for any member of any royal family for hire and offered the crown to Maximillian: a rather bright, fairly liberal nephew of the Hapsburg Emperor Leopold I. 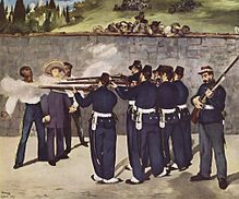 Maximillian declined, preferring to go to Brazil botanising - he was an accomplished scientist as well as being fluent in at least six languages. But when Napoleon III of France (just possibly Maximillian's genetic half-brother) started the Mexican adventure,  Maximillian was blagged into taking up the post as titular head of the Mexican 'empire'.  He was deposed and executed a mere three years later.  The event being 'recorded' back in Paris by Manet in the famous picture which seems more designed to fit on a commemorative postage stamp than a realistic depiction of death by firing squad - if it happened as represented, Max's shirt would be in flames.