The Real and the Ideal 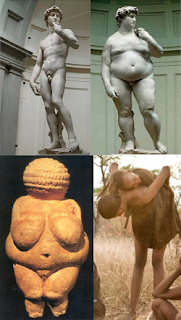 I guess I could have called this post The Possible and the Actual in tribute to Francois Jacob's brilliant short book about bricolage, but I'll hold that back for later.  I'm coming to end of my lecture course on Human Physiology and have to cover 'digestion' soon.  You can't do that without a nod to the epidemic of obesity which is ballooning from America to Ireland.  One of the key ideas in the science of obesity is that our evolutionary heritage encourages us to fill up and fill out at any and every opportunity.  We've spent 95% of the time since we came down from the trees leading an austere and literally hand-to-mouth existence as hunter-gatherers, so when a glut presents we eat and eat and hope to convert as much as possible of the surplus calories to fat.  Sub-cutaneous fat has all kinds of advantages over other forms of food storage - it's portable, doesn't go off and retails at 9Kcal per gram.  Killing a wildebeest was a rare event in those days, when most of the calories came from mongongo nuts, witchety grubs and roots.  The problem for us now is that wildebeest fill every aisle of the supermarket and wildebeest cutlets are available in our domestic fridges.  The genetic program is strong, sugar and fat are delicious and it's hard to stop glomming down another spoonful.  Yes, yes it's more complicated than that and Paranoid Me is rather taken with the idea that the plastification of our world has led to the widespread availability of hormone analogues which are also helping to pump the balloon.

I particularly liked a graphic, which I found on a presentation by Leslie Liebermann from the University of Central Florida and I've rejigged her idea in the picture above.  The ideal in each case is on the left! 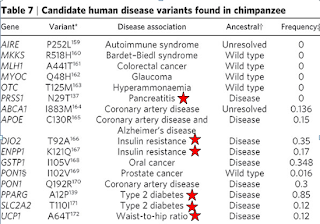 Now here's another interesting insight.  The human genome was delivered into the public domain in June 2000 by Bill Clinton and Tony Blair (thanks, lads, good job on the sequencing) and published by the real scientists, including three Irish analysts Ken Wolfe, Aoife McLysaght and Karsten Hokamp, the following February.  Five and a half years later, the Chimpanzee genome was completed (Nature 437:69-87 01 Sep 2005).  Another Clint was more modestly in the background of that second project as the adult male chimpanzee who contributed his DNA.   Everybody knows that the two species are remarkably similar genetically (98%, 99% identical depending on the details of what you measure).  But an interesting table in the Chimp genome paper reports the differences where the normal variant in chimps is the cause of a disease in humans.  Nearly half of these reverting candidate genes (you can hypothesize that the ancestral human condition was the same as chimps but mutated to accommodate the different lifestyle of the walking ape) are related to digestion and diabetes.
Posted by BobTheScientist at 19:58