POA come round in turn

[ejected prematurely 07Nov22, sorry]
On the 24th of last month I left attentive readers hanging with "It was an interesting morning because I secured cogent advice on two quite different aspects of living your best life" . . . and then only dealt with one such aspect. After I left the Ada Lovelace event, I went back to my old office to check in with two of The Lads who still inhabit that cramped windowless space. It was catch-up time and I mentioned, as a known fact, that my mother had died nearly three years ago. Mild consternation and condolences . . . then the chat turned to their aged parents, their care and inattention and inevitable decline. As women, they were having to shoulder the heavy lifting of elder care; exactly as they have done the lion's share of child care. We agreed that it was a wearing aspect of generational turn-over, that almost as soon as your own children were grown, women were requested and required to navigate and/or captain the foundering floundering ship of aged parents.  "You need to get a power of attorney sorted out, they have an excellent HowTo on hospicefoundation.ie [28 page; 500Mb PDF]".

I was nodding along and contributing my 2c-worth when it dawned on me that by You need to get a power of attorney sorted out they meant Me. And of course it was true, the great circle of life comes round to each generation in turn. Within the last ten years, I've been in a lawyer's office with both my mother and my in-laws where the brinking generation have endeavoured to facilitate the transfer of some part of their agency and autonomy to a younger model.  It was just in good time. Two days later, I was driving somewhere with The Beloved and broached the idea of sorting our own powers of attorney = POAs; no point in delaying it.

It so happened that, the moment [24Oct] my cogent advice post was launched, all three of our adult children were upstairs asleep. I therefore sent them an e-mail proposing that the 5 of us meet in the Polytunnel at 11:00 that morning. And it was so! And it was so useful!! My experience is that if you internalize your thinking without action, then it is easy to descend into an echo-chamber of anxiety. I do this much less nowadays. It was super helpful to be told that I was talking bollix hadn't considered all aspects of the problem. And there were other certainties of the next 10-20 years which were not on the Agenda of the Meeting but nevertheless needed to be tabled for consideration.

For example, my parents moved house to their final destination when they were the same age as I am now. Both they and I, in our late 60s could trip up [and not fall down] the stairs without a thought. As my mother approached her 100th birthday, it was clear that her stairs to be were an accident waiting to happen. And indeed the last time my father went down those stairs was backwards after midnight sustaining a hair-line vertebral fracture as he went down. The stair-lift we installed for my mother cost £3,000; and served her needs for only 5½ weeks before she in turn left home for hospital, nursing home and the great unknown. There is no re-sale value for stair-chairs. Our current house is much pokier more cosy than my parent's mansion and our stairs are steeper than allowed by current building regs, so a chair lift is not a solution to getting from the front door to the bath-room for anyone with wobbly pins or defective balance. 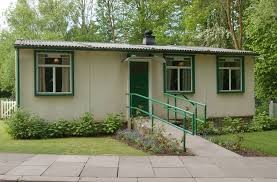 Not this week or this year, but we should think about our exit strategy to another place [like the Welsh example R] without stairs but within walking distance of a pub, a pharmacy and a post-office. I'm a simple chap, I don't desire to impress the neighbours with the size of my flood-lit West Wing. Just a spare bedroom / zoom-office and a sofa-bed in the living room to encourage visits from the grand-children.  And I suppose a wheel-chair accessible bathroom and some serious laundry facilities for when I go All Paris [in . . continent, geddit?].  Not New Ross! Please don't send me to New Ross.