Didn't go down with his ship

In 1879 my grandfather was born, the youngest son, into The Big House in King's County in the Irish Midlands. He was 3½ when his father died and his mother followed 3 years later. The seven kids ran a bit wild as a sense of entitlement kicked off when parental supervision didn't kick in. Anyway, in due course, that sib-group scattered: got careers, got married, left home and only went back to visit. The house  was sold out of the family in 1958: too big, too leaky, for a normal family without servants to run the show. The house and grounds spent the next generation as a girl's boarding school. Over the last decade it has been restored to something close to its former glory and is coming back to life post-covid as an impressive Georgian wedding venue.

The current proprietor cares about history as well as gutters and architraves, and has cut a deal with the descendants of those seven wild youngsters of the late 19thC and we're all going back for a weekend in November. The last of the Magnificent Seven Wild Bunch's F1 [first filial generation] died 6 years ago. But there survive about 40 people from the F2, F3 and F4 generations aged, as they say, from 8 [mo] to 80 and most of them will be there. We have been tasked to bring heirlooms, pictures, docs and deeds; especially those with pictures of striking ladies looking louche beside open-topped motor-cars from 100 years ago.

That's all by way of introduction to a typescript which surfaced among my Father RN's papers consisting of notes about his early naval career. In 1997, he was approached by The Coastal Forces Heritage Trust to talk on video about his time dashing about in motor torpedo boats MTBs in the first part of WWII. The document I have was a sort of notes-to-self or rough script for his perf as Olde Salt Remembers.

Anyway, he and his pals listened to Neville Chamberlain's "sad little speech" on 3rd Sep 1939 from their MTB base in Malta. There wasn't any immediate change in the pattern of exercises and training through September and October but in Early November they were told to plan for a move back to the UK. The older crappier coastal defense craft were to be transport home in a big ship while the more sea-worthy craft were to travel under their own steam to French Inland Waterways via Mers el Kebir, Tunisia; Ajaccio, Corsica and Marseilles.  The Da's boat MTB 06 was a marginal case but he blagged his way onto Team Sea-worthy and they set off from Malta of Armistice Day 1939. The first leg went fine but as the weather turned shitty [worse than in the picture below sketched a month later] as they passed the SW corner of Sardinia and at 01:00, the auto-baling pumps crapped out, then the port-side motor failed and as dawn came up, the starboard engine chugged its last gasp. 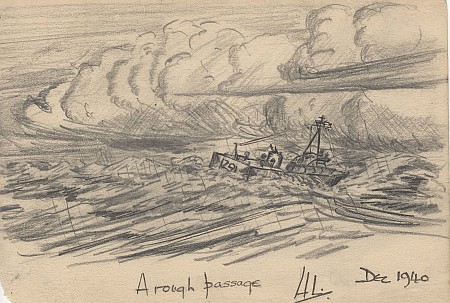 They would have to abandon ship! But it was an orderly evacuation and the crew were able to salvage the personal effects and some of the moveable equipment as their escorting destroyer HMS Dainty H53 dropped down to windward to provide some shelter. The Da was the last to leave, being to step off his first command onto the Dainty's accommodation ladder clutching the wardroom clock. The Dainty's skipper took MTB 06 in tow but the line parted in a squall and it was agreed that MTB 06 should be scuttled by ramming [cheaper and quieter than gunfire].  It's in the interwebs: "15 Nov 1939 HMS MTB 6 broke down and was taken in tow by HMS Dainty (Cdr. F.M. Walton, RN). Later she broke adrift and was rammed several times by HMS Dainty. MTB 6 sank shortly before 2100 hours in approximate position 41°07'N, 08°03'E (off the north-west corner of Sardinia)". Could have been worse. A grounding accident 2½ years later spared him from having to confront Scharnhorst and Gneisenau in another cockleshell -  so my father survived the war intact . . . and here I am.