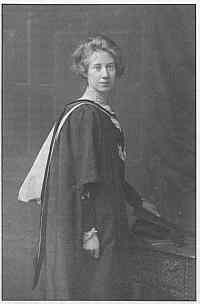 Julia Bell [R in her TCD graduating gown] died on 26th April 1979 [40 years ago today!] having clocked her 100th birthday a few months earlier. She was 21 when von Tschermak-Seysenegg [peas Pisum sativum], Correns [hawkweed Hieracium spp.] and de Vries [evening primrose Oenothera lamarckiana] each independently discovered that their cutting edge work in classical genetics had been scooped a generation previously by Gregor Mendel [prev] crossing his peas Pisum sativum and carefully recording the results. Bell was then enrolled in Girton College, Cambridge where women were allowed to attend lectures and sit exams but not get a degree. She aced the Mathematical Tripos exams the following year and started number-crunching some astronomical data on solar parallax.

Between 1904, when Trinity College Dublin first admitted women, and 1907 when that cohort finished their courses and started to graduate, a peculiar window of opportunity for intellectual women opened up in TCD.  Because of a reciprocal agreement with Oxford and Cambridge Universities, women who had qualified at those misogynistic institutions were invited to receive a University of Dublin degree ad eundem gradum [to the same degree]. Certain classes of people can to this day get such a degree [top of page 5] if they can muster €1,101 and appropriate paperwork. In 1904, the polymathic Provost of TCD was Anthony Traill and he pushed to open the door for women to get a proper degree depite their being denied the opportunity in Oxbridge. 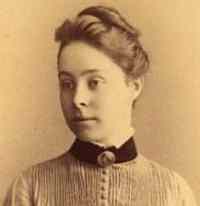 Probably anticipating a handful of horse-ridin' Anglo-Irish gells to take up the offer, the college was a bit overwhelmed by more than 700 women, who had passed through Oxford or Cambridge, and were qualified to get dolled up in cap and gown for their conferring in Dublin. They were charged £10 for the privilege and that money was allocated to start building the first off-campus halls of residence (for women) out at Dartry in the suburbs - and a longish tram-ride to keep the sexes apart when they weren't actually in class. This cohort of enterprising, well-connected and smart women were collectively known as the Steamboat Ladies [super documentary on Newstalk FM] because they generally didn't spend more than a couple of nights in Dublin before going back to work on the other side of the water. Julia Bell wasn't the cleverest woman who graduated in this fashion. That feather probably goes to Philippa Fawcett [see L] who sat the Math Tripos in 1890 and scored 13% higher marks than the best qualified man.

Fawcett went off to South Africa to train the next generations of math teachers, but Julia Bell was head-hunted by Karl Pearson to beef up the maths in the Galton Eugenics Laboratory in London. She was there for decades, working on the mathematics of [human] inheritance. Her focus moved the field away from the easy cases like Mendel's round and wrinkled peas where experimental crosses were allowable and enormous sample sizes achievable. Human genetics was much more difficult because it relied on pedigree analysis. Pedigree analysis was only useful if there were large families of several generations with reliable diagnosis and excellent record keeping. Haemophilia in the royal families of Europe? That was possible. Hereditary deafness in the Davies family, shepherds and coal-miners up the Rhondda Valley in S. Wales - not so much.

In 1937, Bell collaborated with JBS Haldane [prev] to nail down the genetic linkage between colour-blindness and haemophila, the mutations for which were both known to be carried on the X-chromosome. Because the paper was published in the Proceeding of the Royal Society, the PDF is available albeit in a grey on grey scan that isn't easy for old eyes to read. The data wasn't easy to analyse either and the paper is not for the faint of algebraic heart. At issue is the case of heterozygous women: whether women need two copies of the mutant gene to manifest the disease or if one copy will do. Haemophilia is vanishingly rare in women because a) it is fully recessive = two duff-copies needed b) it requires a haemophiliac father who hasn't bled to death before he was old enough to make babies. This is decades before Factor VIII was available to ameliorate the symptoms of haemophilia. The discussion of the other disease starts with a great Haldanesque tell-it-like-it-is: "On the other hand, colour-blind women whose putative fathers are not colour-blind occur too frequently to be explained by illegitimacy." Which highlights another aspect of dodgy data in human pedigrees [prev on non-paternity] which doesn't happen is properly constituted lab-animal experiments.  I think that analysis was the first description of genetic linkage in humans; and required finding 4 large families through which both disorders ran for several generations. 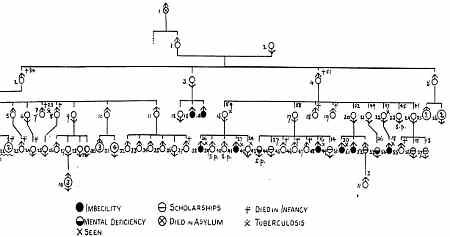 She is also note-worthy for doing the early studies on the inheritance [PDF here] of what we now know as Fragile X mental retardation but which was for many years know eponymously as Martin-Bell Syndrome: from another big pedigree study [part of which is shown above] in which boys kept popping up with 'mental deficiency', autism, big ears, long face and unfeasibly large testicles. Intercalated in the same extended family are numerous children smart enough to win scholarships. The paper included a lot of peripheral [and judgemental] data <TMI> V 32, said to be very fat, is employed in a fish shop . . .IV 3, a heavily built woman, crippled by arthritis . . . V48 Is unemployable, wet, and dirty </TMI> that would surely not be allowed in today's GDPR-compliant literature. Why Fragile X? Because if you look at the chromosomes of people with the syndrome, you can see a little waist at the end of the long-arm of Chr.X. We now know that this is due to an expansion of a CGG repeat in the FMR1 gene at that location. FMR1 affects the location and abundance of receptors for the neurotransmitter glutamate - ah but that's another story for another time.

After WWII, Victor McKusick, of Johns Hopkins U, started to accumulate and publish everything that was known about genetics in our species; the first edition in 1966 flagged nearly 1,500 conditions.  In 1987, the project went on-line to become OMIM now documenting nearer to 25,000 variations which are heritable. Not all of these are diseases: Kirk Douglas used to feature because his sons have a cleft chin just like their dad; but some post-McKusick functionary has tidied that anecdote out of OMIM entry 119000. OMIM is neverheless a treasure trove of genetical miscellania.

But Julia Bell probably deserves most credit for an infrastructural project that served as the human genetic foundation from which many subsequent forays towards the frontiers of science could be launched. The other great infrastructurialist, McKusick became famous for building on her work a generation later. Bell's gaffer Karl Pearson started compiling The Treasury of Human Inheritance in 1909 and the Galton Lab was still keeping the compendium up to date 50 years later in 1958. The most significant contributor in word count was certainly Julia Bell especially in the areas of ophthalmic and neurological genetics; as exemplified by her work [see above] on the mental and neurological deficits of Fragile-X. There is a good tribute to this period of her life by Peter Harper of Cardiff U. in Human Genetics (2005) v116:422-432 but you may have to go to SciHub to step round the paywall. I allowed myself a snitty comment about extraneous information in Martin & Bell but Bell's work on ToHI is characterised by the breadth of its accumulated, and apparently miscellaneous, data which has allowed subsequent workers to mine her tables for useful information long, long after the patients and their families have passed beyond their ability to contribute a DNA sample.

More Women of Science
The Steamboat Julia Belle is an entirely different matter.
Posted by BobTheScientist at 07:40