Before Pi-Day, I cobbled together some links related to tthe ratio between the circumference of a circle and its diameter. Then on Pi-Day itself I wore a waggish pi=Pie t-shirt to work. It was okay to do that, it didn't hurt anybody although I felt under-dressed to have my pasty-white arms exposed. Other people take their obsession with π a bit further. Most people don't know or care when Darwin's birthday is; I used to bring donuts into work to mark the day; but I didn't dress up as Darwin or read the Origin of Species aloud for 24 hours - there are limits.

There are no limits to the number of digits of π. Here are the first few: 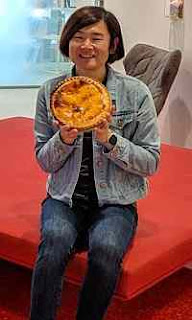 Just in time for Mar 14 [3.14] Google employee Emma Haruka Iwao used Google's cloud computing service to break the world record for calculating pi, an infinite number vital to engineering. Well up to a point Business Insider: π is only vital to engineering if you are using it to make round things and then only to a certain level of accuracy. If you want precision of ball-bearings in a run or a piston in a cylinder with very high tolerance, then you need some sort of an estimate of π to punch into your milling lathe. What Iwao [shown R with a whole pie] did was calculate π to 31,000,000,000,000 digits as opposed to the 47 I included above. That's pages and pages of numbers about the same as the contents of the Library of Congress the world's largest respository of information. Iwao required the use of 25 'virtual machines' (fancy computers) working together for 120+ days to crank out her record breaking result. Which will get broken just as soon as someone else throws sufficient money at the problem to pay for the electricity.

NASA is full of engineers used to big numbers and long distances but they only bother with 3.14159 26535 89793 that's 15 digits. Marc Rayman at the JPL / NASA  in California tells us why they stop at 15 digits. It's because adding more digits doesn't get realisably more accurate. A few examples are given at the link, to indicate how much does the 15th digit matter: About the width of a molecule compared to the circumference of the World! To measure the radius of the observable Universe accurate to the diameter of a proton would require only 40 digits of π. Here they are