I'm clearly on an End of Life roll, having just knocked off When Breath Becomes Air, Paul Kalanithi's memoir about his last months alive. If you're looking for guidance about how to approach the end, then one fellow's story is only of limited use. My mileage may vary because I'm not a brain surgeon and I don't live in California and I cannot accept that there is only one way to go. Accordingly, my next book was Kathryn Mannix's With the End in Mind: dying, death and wisdom in an age of denial, which covers 3 dozen different stories. Hmmm, that's a sample of options, that's data even. The trouble is that we only get one run at it; unless, like my mother, you have a Near Death Experience with the light at the end of the tunnel. For her, having been there when her spleen ruptured a few days after abdominal surgery 40 years ago, there is very little to fear the second time around. 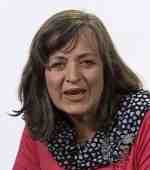 In her book, Dr Mannix [L talking about her book for HarperCollins] is only cherry picking her experiences of a couple of decades acting as a palliative care specialist operating out of a hospice. Indeed she confesses to coalescing a few related stories into a few of her chapters, the better to draw the necessary lesson. I say lesson, because the book is consciously didactic in tone, hoping that her readers will learn more about the process when the time comes and get some clues about how to behave in ways that make it easier for all involved. One issue is that the professionals are quite resilient: they've seen cases like you-and-yours before and are unlikely to drop a clanger . . . and after the passing you probably won't see them ever again. Your relatives are a different matter, they will have their own reactions and certainties, and you're advised to give them space even if you'd do things differently.

The book is not without humour, as when a father is fading rapidly from motor neurone disease and isn't going to make it for a final Christmas in the bosom of his family. The hospice arranges for the family to bring Christmas forward 5 weeks so that they can celebrate it together . . . the professionals are careful to switch off Dad's oxygen feed before they bring in a flaming Christmas Pudding. WHOOMPH. The family of another patient calls his massive abdominal tumor 'Bruce' because it came from Down Under. Making Christmas dinner in the hospice kitchen is the least of it. The team is wide open to doing a lot for the people who pass through their care: sewing a memory pillow for someone who can no longer hols a needle; baking rock buns like an old lady's mother did in a previous century; feeding the cats . . . and making an unending stream of cups of tea.

One technique is to use the Socratic method to get at key evidence. As well as being a pallie, Dr Mannix believes in CBT cognitive behavioural therapy as a way of addressing anxieties. Bringing these out into the open and dealing with them gets, for most people, a better outcome. By asking people to articulate their worries, she can sometimes drill down to an unspoken fundamental concern that may not have been consciously acknowledged. The dying that they will distressed their family by choking to death on their food or suffocating in a panic attack. "How many meals have you eaten in the last month?" she asks "and how many times have you choked, hmmmm?". The maths is incontrovertible and allows for a last tasted meal or two rather than subsisting through a dreaded percutaneous endoscopic gastrostomy (PEG) tube.

Dr Mannix, for all her competence and training as a doctor, is at heart a poet, with a sensitivity and sensibility that no amount of training can induce. Take this description of a first visit to the home of a teenager who has only amonth to live. "The nurse introduces me to Sylvie's Mum. Sylvie's Mum gestures around the huge farmhouse kitchen, warmed by a squat ancient Aga-type stove, and apologies for 'the mess'. The mess seems to be an open newspaper and a tea-cup lying on the table. Or perhaps she thinks we can see her soul."

But perhaps the most important lesson is to acknowledge the hospice's practice of talking to rather over someone who is comatose or unconscious. There is increasingly good evidence that you can hear and digest information long after you've lost the ability to respond. It will be an easier Off knowing that your Boy has arrived from Athlone or Australia. In contrast to Sherwin Nuland, Dr Kathryn Mannix believes that many deaths are not usually accompanied by pain and distress but are rather a slowing down of the life support system until it stops. Perhaps that's the difference between a hospice / home departure compared to a hospital where the crash-team is only seconds away and ready to break a few ribs doing CPR.
Posted by BobTheScientist at 07:50